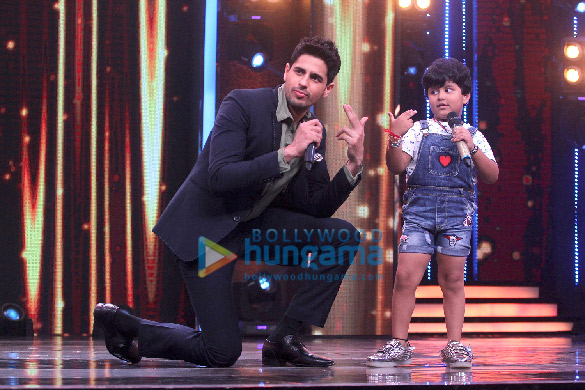 Sidharth Malhotra and Jacqueline Fernandez are leaving no stone unturned for the promotions of their forthcoming film A Gentleman - Sundar, Susheel, Risky. And for the same, we have seen them making appearances at several shows; the recent ones being the reality show Sa Re Ga Ma Pa Li’l Champs.

The said show is a singing based talent hunt show of sorts which encourages children to enhance their interest towards music and provides them with a huge platform to showcase their talent. Sidharth Malhotra and Jacqueline Fernandez, who were a part of the show, were not only impressed to see the talented kids perform but also gave them some memories that they will always cherish. Besides that, Sidharth also has a special connect with music when it comes to this particular film since it is a genre he is experimented with for the first time in A Gentleman.

Earlier we had reported that Sidharth Malhotra will turn rapper for the film wherein he rapped for the song ‘Bandook Meri Laila’ that released recently. While the actor continues to receive appreciation for the same, he gave a glimpse of his rapping skills even on the show Sa Re Ga Ma Pa Li’l Champs. In fact, it so happened that one of the contestants of the show, the six year old Jayas Kumar invited Sidharth and asked him to teach rap. While the actor was more than happy to oblige, this was his first live rap performance on stage.

This episode of Sa Re Ga Ma Pa Li’l Champs is yet to be aired on Zee network. As for the film A Gentleman - Sundar, Susheel, Risky, it is slated to release on August 25.