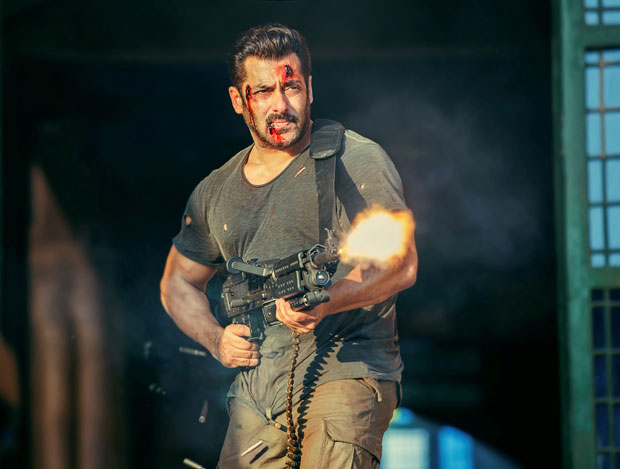 The first thing that comes to one’s mind about Tiger Zinda Hai is the promise of breath-taking action in the film. Salman Khan, who reprises his role as Tiger, will be seen in some jaw-dropping and death-defying never-seen-before action in the most awaited action entertainer of 2017.

Tiger will be seen pulling off some insane stunts and wielding some of the heaviest weapons to tear down his nemesis. MG 42, a massive machine gun as seen in the picture, is the weapon of choice for Tiger to fight his gritty battles. Salman Khan’s character fires the gun in a heavy-duty action sequence that forms a crucial part of the film’s plot. Shooting with the weapon, though, didn’t come easy. The MG 42 weighs as much as 25-30 Kilos. But what sets this weapon apart is that unlike conventional weapons the MG 42 averages approximately 1200 RPM (Rounds Per Minute) with a belt loaded magazine, which makes the gun a beast of destruction.

Director Ali Abbas Zafar explains, “When you feature a superstar like Salman Khan, who is known to pull his weight for a film’s action, you need to have weaponry that suits his stature and also fit in with the scale of Tiger Zinda Hai.” He adds, “This fight sequence is part of a very crucial chapter in the film, and the weapon needed to match the scale and impact of this moment. For this scene, Salman Khan fired around 5000 cartridges, over 3 consecutive days. It actually becomes one of the most iconic shots of the film. Because the gun was being used continuously, we needed to keep two such weapons ready for use. It generates extreme heat and we worked in very hot conditions. We had to flip the gun continuously, and keep both in perfect functioning condition.”

In its scale and vision, Tiger Zinda Hai is a truly lavish, grand and a larger than life film. It’s what you call a true blue Bollywood masala entertainer for every audience segment. Reuniting Salman Khan and Katrina Kaif, Tiger Zinda Hai promises to deliver edge of the seat, global standard action and thrills to audiences on December 22.