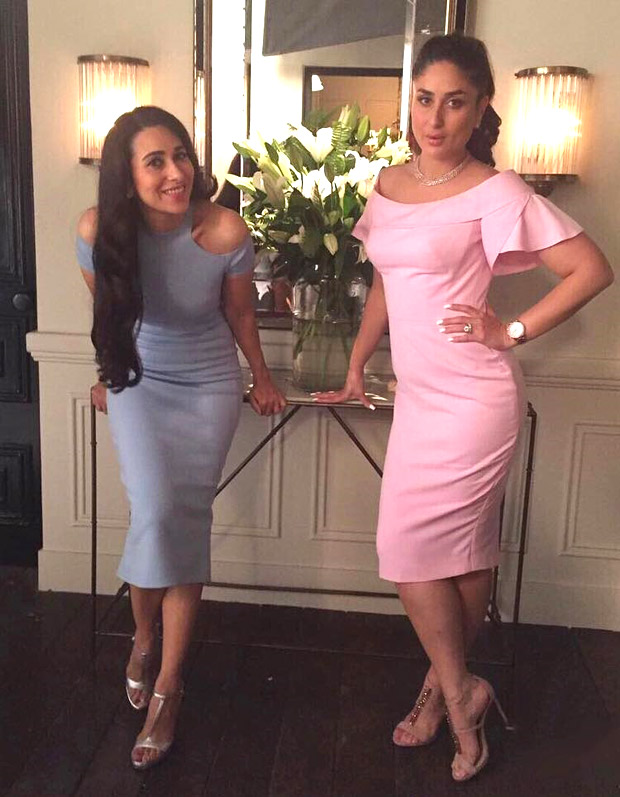 Karisma Kapoor might not be doing films anymore but she is surely rocking the show with her public appearances, wearing gorgeous outfits, and also on Instagram. The actress regularly shares some lovely pictures of hers that get immediately lapped up by her fans. No wonder that she has amassed more than 2 million followers on Instagram in just three years.

Karisma Kapoor’s latest post however has made her fans totally crazy like never before. It features her posing sexily with her sister, the very beautiful and sizzling Kareena Kapoor Khan. Through the caption she informed fans that she is shooting for a brand shoot with her sister. “Awesome day shooting with the sis #somethingspecia l#comingsoon #brandshoot” was the complete caption. This marks the first time that both Kareena and Karisma Kapoor are collaborating together on a project.

From the picture it is evident that both look absolutely stunning. Karisma Kapoor is wearing dusty blue cold shoulder dress and her hair is beautifully cascading down her shoulder. Her trademark smile adds to the charm. Kareena Kapoor Khan, on the other hand, has donned a baby pink outfit which along with her necklace, her royal watch and her pose gives her a very classy look.

Apart from the picture, Karisma Kapoor shared a cute boomerang video of them hugging each other happily with the caption, “Fun day at work #sistersforever #loveyou”. Fans of these lovely ladies definitely can’t wait to see what both of them are upto!

Karisma Kapoor was a popular heroine of the 90s but she took a sabbatical from films after her marriage to Sunjay Kapur. However the marriage didn’t last long and they were divorced in 2016. She made a comeback in movies with Vikram Bhatt’s Dangerous Ishhq but it bombed at the box office. Kareena Kapoor Khan, on the other hand, too had taken a brief breaks from films owing to her pregnancy. Her son Taimur Ali Khan Pataudi was born on December 20 last year. She is now all set to start Veere Di Wedding, co-starring Sonam Kapoor, Swara Bhaskar and Shikha Talsania.