It is a known fact that Anil Kapoor is a busy man with many projects in the pipeline. Recently, his film Race 3 is making news. Reason? The makers have been releasing first look posters from the film. Besides this, the actor will also star in Ek Ladki Ko Dekha Toh Aisa Laga. This film is special for him because it features him alongside his daughter Sonam Kapoor for the first time. And now we hear that adding to the same, the actor received a rather unique surprise on its sets. 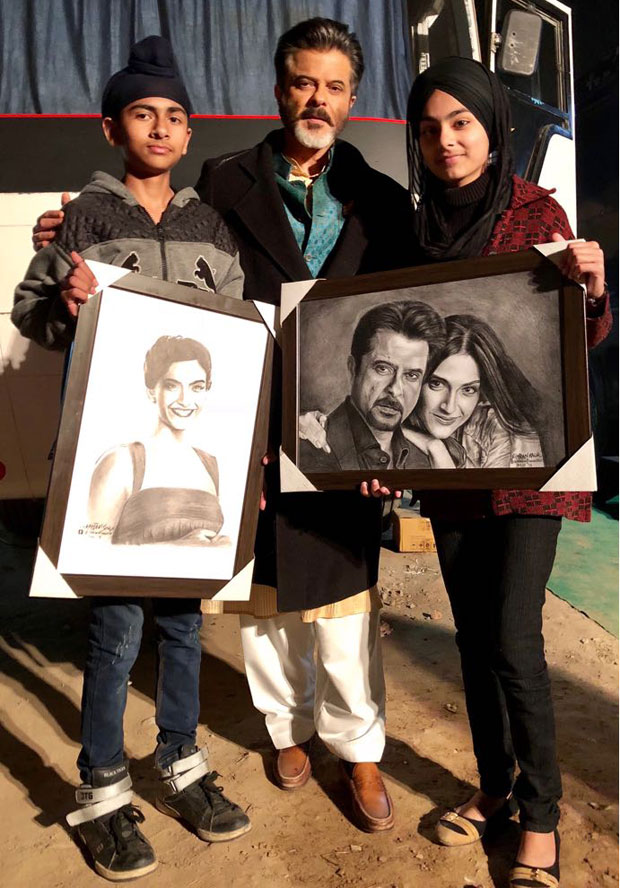 For the uninitiated, Ek Ladki Ko Dekha Toh Aisa Laga went on floors in Patiala few months ago. When the actor was shooting for it, he was in for a pleasant surprise. It was given by none other than his two young fans. They travelled all the way to meet their favourite star on the sets of this film.

One of the avid fans was named Simran. She travelled to Patiala from her hometown to not just meet the star but also to gift him something special. She presented Anil Kapoor with 2 sketches she made herself. Simran is quite passionate about art and decided to sketch not just the actor but also his daughter Sonam Kapoor.

From what we hear, she along with her younger brother were keen on gifting him these two sketches owing to their love for him. On the other hand, Anil Kapoor immediately rushed to meet them as soon as he heard that they were waiting for him. He was also quite overwhelmed with the gesture

Considering the efforts and hard work they put behind this, Anil decided to also spend some time with them. In fact, he even had lunch with them which obviously left them thrilled too. Reportedly, the said sketches took over 7 days to finish.

When contacted Anil Kapoor on the same, the veteran star said, "It's always an overwhelming feeling to witness love from fans. I was really touched by the gesture and it always inspires me to keep going. "

Also Read: Anil Kapoor to produce a Netflix show in India; to star in another Netflix show