Bollywood has been often called out to be an utterly sexist industry where a leading lady is decorative furniture and it’s the hero who leads the story. But things have DRASTICALLY changed now and how! The year 2018 brought in all kinds of surprises, from the trade aspect as well. The movies to have done well were the so-called ‘non-commercial entities’ with stories largely driven by women. It is clear now that even in the Indian Film Industry, Content Is The King or Queen, more accurately. The movies to have made business this year were: Stree, Badhaai Ho, Andhadhun, Padmaavat, Raazi. There is a common feature between all of them. Women play an integral role in carrying the message forward in each story. It is very interesting to note that the makers now do not box women into a heroine or a vamp but pepper their character with oodles of grey shades without attaching labels of ‘sati-savitri’, ‘abala naari’ or a ‘vamp’. Following are a few PATH BREAKING characters portrayed by Alia Bhatt, Deepika Padukone, Tabu, Neena Gupta and Taapsee Pannu which celebrate womanhood in its every sense. 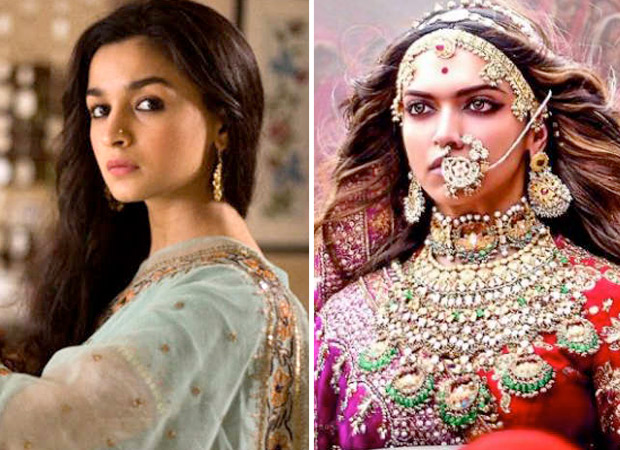 Alia Bhatt’s fierce yet frail Sehmat Khan was just another girl next door with a heart of a lioness. Alia’s portrayal of an Indian spy married to a Pakistani military official was every bit gritty and inspiring to an extent. This Meghna Gulzar directorial was pitched as a small content driven film but it became a huge commercial success after masses from every strata watched and appreciated Sehmat Khan’s stirring story revolving around patriotism, call for duty and love for her husband who is her mortal enemy, thanks to the circumstances.

Deepika Padukone’s Rani Padmavati can be written down as one of the most regal, majestic and heroic depiction of a queen left to defend her honour at the face of adversity by a cruel King, played oh so passionately by Ranveer Singh. DP essayed the titular role with unparalleled grace and gravitas. While Ranveer Singh and Shahid Kapoor played important characters, the story was still about her and she held her ground in every frame she was in.

A complete departure from her earlier characters, Shraddha Kapoor enthralled us with her mysterious act in Stree. She left us on a cliff-hanger at the climax of the film which left us wonder about the truth of her existence. Of course, Shraddha’s character was strongly aided by Rajkummar Rao and Pankaj Tripathi’s performances but she was the catalyst of the story.

Films like Badhaai Ho gave us hope that middle-aged actresses can do so much more than just be moms or villains to the lead heroes. Neena Gupta finally got her due as an actress par excellence with this character who gets pregnant in her middle age, leading to all sorts of discomfort and conflict in the society. There was a definitive dialogue about women hood, choices and acceptance of the same by the male dominated society and Neena Gupta just took it all away with her silent yet strong performance.

Not your usual villain, Tabu’s Simi was deliciously evil, sinfully seductive and completely unapologetic about her choices. Tabu’s character was like a brilliant dash of bittersweet spice added to already palatable dish conjured by talent houses Ayushmann Khurrana, Radhika Apte. Sriram Raghavan’s black comedy was mostly successful because the magic that Tabu spun on screen, effortlessly…keeping us on the edge of our seats till the end.

It would be unfair to list out all the important women characters of 2018 and leave out Taapsee Pannu’s fiery Rumi from Manmarziyaan. Anurag Kashyap’s love story starring Vicky Kaushal and Abhishek Bachchan did not make big bucks but it made a lot of news for only one reason: The way its heroine’s character was written. Kanika Dhillon’s writing and understanding of Rumi broke all boundaries attached to how a mainstream Bollywood heroine should be or behave on screen. Needless to say, Taapsee’s Rumi was flawed, fabulous and brilliantly fierce.