Shabana Azmi: “Sushma Swaraj was a remarkable parliamentarian and a lovely person. I shared a very cordial relationship with her. She was accessible, friendly and warm with everybody. She had chosen me as one of her Navratnas as she called us, 9 people from various disciplines in the Film Industry whose views and advice she would invite. As I and B Minister, she singlehandedly got Industry status to the film industry which had a transformative effect in the way films started getting funding …She had an amazing memory. She was once on a panel with me and asked me for the names of the other panellists. I wrote them down for her, 9 of them. She glanced at the paper and when she got up to speak she had all the names in the correct order! She, along with Sonia Gandhi and Meira Kumar was instrumental in getting the Copyright Amendment Bill passed. She has gone all too soon. We will miss her. Deepest condolences to her family.” 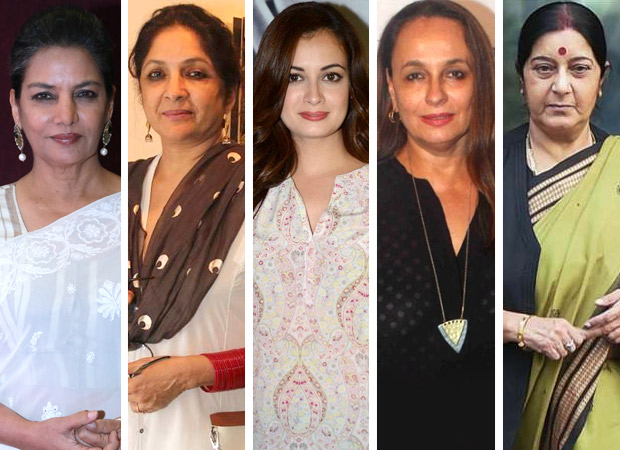 Neena Gupta: “Bahut suljhi hui samajhdaar…. She was gracious soft-spoken, pleasant result-driven and yet very gentle and kind. Even those who don’t agree with the BJP’s policies were fond of Sushma Swaraj. I’ve seen that. I don’t know of anyone who knew her and did not like her. It’s really sad to see her go so suddenly. She was too kind and too useful to have left so early.”

Dia Mirza: “She was a tall leader. Deeply admired and respected her. Remember watching her speeches in parliament as a child and my admiration for her only grew as an adult. As she continued grew in stature she was never became arrogant, she remained humble, strong, effective, empathetic and so deeply committed to our democracy and people.”

Khushboo Sunder: “In Sushma Swarajji India had a very efficient lawmaker who was also a wonderful human .She has gone out of her way to help people beyond the capacity of her Chair, a very graceful person, a tigress in her ability and a brilliant orator.”

Soni Razdan: “She was an exceptional lady. A true statesman with a heart of gold. The work that she did to help so many people with their visas and when they were stuck across the border will be remembered long after she has gone. I know I speak for many when I say that I will miss her terribly even though I never knew her personally. Such people are rare gems and we have lost one such.”