Last Updated 02.12.2021 | 10:29 PM IST
feedback language
follow us on
Bollywood Hungama » News » Bollywood Features News » Will a film starring the Khans – Pathan, Laal Singh Chaddha or Radhe – emerge as the HIGHEST grosser of the year in 2021? Trade shares its views

There was a time in Bollywood when it was a given that the year’s highest grosser would either be starring Salman Khan or Aamir Khan or Shah Rukh Khan. This trend continued uninterrupted for 11 years from 2007 to 2017. In 2018, it was Ranbir Kapoor-starrer Sanju which sprang a surprise. Directed by Rajkumar Hirani, it was appreciated by all sections of moviegoers and collected a huge Rs. 342.53 crore. In 2019, it was Hrithik Roshan and Tiger Shroff’s action-packed drama War which was the biggest hit. The excitement of watching these two acted pitted against each other led to immense curiosity among viewers and it was no surprise it collected Rs. 317.91 crore. In 2020, it was one of the first releases, Tanhaji – The Unsung Warrior which took the number 1 spot. The Ajay Devgn-Saif Ali Khan-Kajol starrer made a huge Rs. 279.55 crore. The film was loved as it told an untold brave story from the pages of history. Also, the performances, action scenes, script and the fact that not many films released in 2020 in the pandemic went in its favour. 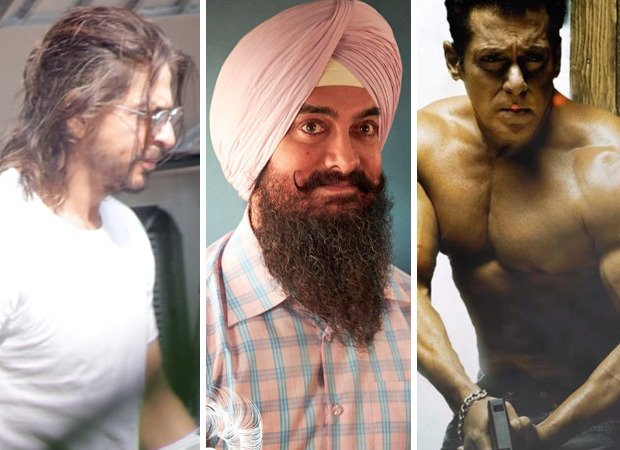 The question that arises is – will a non-Khan film once again emerge as the biggest blockbuster in 2021 as well? Or will a Khan film snatch the top spot yet again? The latter is very much possible. All 3 Khans have a major release this year. Aamir Khan will be seen in the social drama Laal Singh Chaddha, the remake of Tom Hanks-starrer Forrest Gump (1994). Salman Khan meanwhile will unveil his actioner Radhe - Your Most Wanted Bhai, which looks very entertaining and commercial. Shah Rukh Khan, who didn’t sign a film for more than a year, finally started shooting for Pathan. Directed by War director Siddharth Anand, it sees SRK in a slick, action avatar and is also joined by John Abraham and Deepika Padukone. It is reportedly a part of the YRF Spy Universe and that Salman as Tiger will make a massy appearance in the film for around 10-12 minutes.

As a result, all these film stand a chance of making a moolah at the ticket window. However, the other major actors too have exciting releases lined up. Akshay Kumar and Rohit Shetty’s Sooryavanshi is lined up for release in 2021. The superstar will also be seen in a period action flick, Prtihviraj. Ranbir Kapoor will have two releases in 2021, both of which seem to be big-scale spectacles – Brahmastra and Shamshera. Ajay Devgn will be seen in the exciting sports drama Maidaan. Another sports flick expected to break records is Ranveer Singh’s ’83. His other big release is Rohit Shetty’s Cirkus. These and many other films also can be potential highest grossers of the years.

We asked trade experts to share their opinion. Akshaye Rathi, film exhibitor and distributor, says, “Pathan stands a great chance. It’s Shah Rukh Khan’s comeback after so long. Salman Khan’s Radhe - Your Most Wanted Bhai is, I believe, on the lines of Wanted (2009) and that’s one of his best films since his 2.0 avatar. Aamir Khan, meanwhile, raises the bar with every film. So all of them can be possible highest grossers of the year. Even RRR, Sooryavanshi, ’83, Maidaan, Cirkus etc. have a chance. I hope all these big films do really well so that the cinema exhibitor gets back to where it was previously.”

Trade expert Komal Nahta predicts, “I have a feeling that if Laal Singh Chaddha releases, it’ll be the biggest film of the year.”

Trade analyst Taran Adarsh, takes a cautious route, as he says, “It depends on the content. Content has to click. And I think all films should work, regardless whether or not it stars a Khan. Ab number 1 pe kaun baithega who toh agle saal hi pata chalega. Content matters. How does one explain the Rs. 245.36 crore business of Uri – The Surgical Strike, or Tanhaji – The Unsung Warrior being the biggest hit of 2020? I am sure the producers must also be wanting for these films to do well, but I don’t know even they must have imagined that it’ll do so well.”

Trade analyst Atul Mohan is confident that Sooryavanshi and Laal Singh Chaddha might take it to the numero uno spot in 2021. He says, “The trade is not expecting anything less than Rs. 275-300 crore from Sooryavanshi. As for Aamir Khan, except Thugs Of Hindostan (2018), all his films in recent times have done Rs. 300 crore plus.” He also adds, “Ranveer Singh can also surprise.”

But Atul Mohan also adds before signing off, “The box office would not remain the same. If a film manages to collect Rs. 100 crore, it should be perceived as good as Rs. 300 crore, in the new normal era. There shouldn’t be a chase for the numbers now. The priority is that people should come in the theatres. Box office numbers should not be the benchmark to judge a film.”