While many A-listers are voluntarily jobless—okay, that’s only partly true, because some of them have outpriced themselves from the market—there are superstars who are working round-the-clock and will be seen in multiple projects. 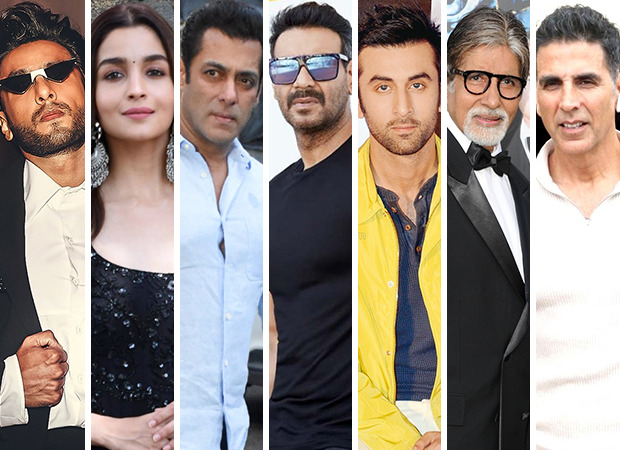 1. Ranveer Singh: If all had gone well, Ranveer's big-ticket potential National award entry '83 would have been released by now. But we all know what happened, so Ranveer now has four releases in 2021. Kabir Khan's ticket-to-cricket 83 will be followed by Yashraj Films' Jayeshbhai Jordaar and a film whose team has spelling problems, Cirkus. And don't forget the guest appearance in Sooryavanshi. Quite choc-a-block year for Ranveer.

2. Alia Bhatt: 2021 is a crucial year for her. She has three potential blockbusters up for release, one of them with her boyfriend Ranbir Kapoor. But before that there S S Rajamouli’s RRR where she has a brief but important role. In Ayan Mukerji’s Brahmastra she shares screen space for the first time with Amitabh Bachchan, Ranbir Kapoor and Nagarjuna. Above all, it’s Sanjay Leela Bhansali’s Gangubai Kathiawadi which will catapult Alia into the league of all-time greats.

3. Salman Khan: Film distributors from across India have written to Salman exhorting him to release Radhe – Your Most Wanted Bhai for Eid 2021. God and Covid willing, Radhe will not be the only Salman release this year. He is also rushing through his brother-in-law Aayush Sharma sophomore starrer Antim: The Final Truth being directed by Mahesh Manjrekar. Plus there are the two guest appearances for the Khan superstars Aamir in Lal Singh Chaddha and Shah Rukh in Pathan. Phew, busy year ahead for Bhai.

5. Ranbir Kapoor: 2021 will see the erratic career of one the most talented actors busier than ever. While Ranbir’s pal Ayan Mukerjee helms the sci-fi thriller Brahmastra, in Shamshera Ranbir plays a full-fledged dacoit galloping through the Chambal valley. Finally there is Sandeep Vanga’s Animal, a dark thriller where he plays a character never done in Hindi cinema.

6. Amitabh Bachchan: No full stops for India’s most durable superstar. Mr Bachchan has Brahamastra and Jhund. But before these there is Rumi Jaffrey’s Chehre. Plus two more projects under negotiation. Just hearing of the volume of his work is exhausting.

7. Akshay Kumar: How does he do it? How does he manage to squeeze in an average of 3-4 films per year? In 2019 he had 4 releases Kesari, Mission Mangal, Housefull 4 and Good Newwz. Even during Covid in 2020 Akshay had Laxmmi. Now in 2021 Akshay will be seen in 4 very difference films in diametrically diverse roles in the ready-for-release Sooryavanshi (teaming up for the first time with director Rohit Shetty), followed by Aanand L Rai’s Atrangi Re (teaming up for the first time with Rai and his co-star Sara Ali Khan), Bell Bottom (first collaboration with Ranjit Tewari who earlier directed Farhan Akhtar in Lucknow Central) and last but definitely not the least Prithviraj where he plays the mighty historical figure Prithviraj Chauhan.