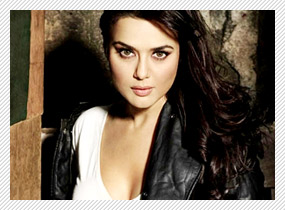 Preity Zinta is just back from a 2-month sabbatical in the US, straight into the vortex of the gangrape crisis in Mumbai.


Too stunned to speak, Preity finally says, "Is there anything left to be said or done? Haven't women like me who are supposed to have a clout and a voice said it all during the Nirbhaya incident? Then what happened? 9 months have passed. The bastards who did it are still to be sentenced. How can rapists be discouraged if they know the law takes its own course?"


She derides the custom of covering the culprits' faces with a black mask. "Why are rapists allowed to hide their faces? They should be forced to show their faces to the public. I remember the mother of a rape victim had printed a picture of the rapist in the newspaper. We need to look for remedial solutions to the horrendous atmosphere of uncertainty and fear that women have to face. Otherwise we will become more and more self-centered. We'll react to a crime only when it happens in our home."


Preity feels it's time for drastic measures. "Fast-track courts are not working. Maybe special courts to try rape cases are the solution, though even that sounds like a time-consuming process. I think a better solution is to try offenders in crimes against women outside the courts and then just get rid of them? I am sorry if I sound radical and too drastic. But the time for pleasant pontification and dainty legalese is over. We need to take stock of the situation now. Or the country would plunge into anarchy and civil war."


An immediately rectification in the situation would be admissible if rape and crime against women become a state issue.


"How much can the Centre bear? Let the safety of woman be a state issue. It's time to bring changes in governance. What we are witnessing is the death of the system. Only a miracle can revive it," Preity is in despair.


Preity blames the shoddy quality of political leadership for the state of law and order in the country. "How many of us actually vote to choose our leaders? Do you know, in the slums, television sets and alcohol are distributed on the night before elections. Do you think the poor can think straight and vote for the right people when they are lured away like this? And let's face it; the definition of the common man has changed. We are all the common people. Some of us may think we have a voice because we're celebrities. But how much does that voice really matter? During the Nirbhaya case I spoke to so many people in power. Everywhere I was stonewalled by 5-year plans. Arrey yaar! In 5 years there will be 500 others awful crimes against women, one more gruesome than the other. Are we supposed to just give up and only hope that those close to us don't get affected? Or are we supposed to hold candle light vigilance after every such incident and then return to our normal lives? I am really quite lost on this issue now. I don't know what to do."

Sara Ali Khan looks ravishing in red for the…