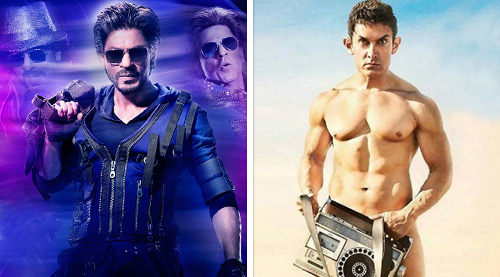 With records being broken left, right and center, holiday releases being planned, each of the superstars delivering a century at will, new kids on

the block making it seem like a child's play (pun intended) and greater milestones being set, the films are pretty much expected to be 'designed'

for that 'One Big Show'.

No one really placed the bets this high until 2008. Now that was the landmark year when India got its first Rs. 100 crore hit in Ghajini. A

The man behind it all? Aamir Khan.

Let's take a step back into history

After Ghajini, Aamir Khan went on to construct the Rs. 200 crore club of his own too with 3 Idiots the very next year. Clearly, the

man was on a roll and others had to pull up their sleeves.

Results started to show as well. Salman Khan made an entry into the club with Dabangg. Ajay Devgn got his own with Golmaal 3 and

Shah Rukh Khan struck soon after with Ra.One. The very next year the rest of the superstar lot made it big too, what with Hrithik Roshan

(Agneepath) and Akshay Kumar (Housefull 2) managing one each too. Abhishek Bachchan plucked one in with Bol Bachchan

and Ranbir Kapoor did with Barfi! what was expected out of him, i.e. be the youngest star around to gain an entry into the club dominated

Each one of those who were expected to deliver had delivered and now it was time for the younger lot to start proving his mettle. Though Saif Ali

Khan made a tad belated entry with Race 2, others like Farhan Akhtar (Bhaag Milkha Bhaag) and Ranveer Singh (Ram Leela)

made their presence count too. Oh yes, there was an unusual entry in the form of Riteish Deshmukh (who had been a part of multi-starrer set up

Housefull 2 before along with John Abraham), Vivek Oberoi and Aftab Shivdasani too with Grand Masti but no one really minded

However, when Arjun Kapoor and Sidharth Malhotra struck with 2 States and Ek Villain respectively, it was time for Bollywood to

The cycle was complete, and from Aamir Khan to Sidharth Malhotra, each one of them had found his own place under the sun. It was time to

While Aamir Khan has pioneered this trend too, it hasn't been easy for many to match up pace here. Shah Rukh Khan did it with Chennai

Express. Hrithik Roshan soon followed with Krrish 3 (if official collections - though shrouded in controversies - are anything to go by).

Salman Khan, after coming precariously close to the mark with Ek Tha Tiger, has now managed it with style, courtesy Kick. On the other

hand, Ranbir Kapoor exceed expectations with Yeh Jawaani Hai Deewani and the film chugged along, only to fall short by a mere Rs. 11

Well, his time will come too, but before that others in the league need to get to that number quick. Akshay Kumar has an interesting 2015 ahead

while and Ajay Devgn has never ceased to surprise, his Singham Returns being the recent example. Ranbir Kapoor too is taking his steps

carefully while Ranveer Singh looks like the most likely candidate amidst the younger lot to score a double century by end of next year for sure.

This pretty much leads to the equation that when Rs. 200 crore would become a norm by 2015 end, what is left for the existing superstars to

achieve and set the bar higher?

Well folks, this is where Aamir Khan and Shah Rukh Khan come into picture!

Shah Rukh or Aamir - Who gets there first

Yes, Salman Khan is leading from the top when it comes to the '100 crore club'. He has an astonishing count of seven to his name and it seems

improbable that in next couple of years at least, Shahrukh Khan (4) or Aamir Khan (3) would be able to surpass that. Hence, the best way out to

win over the competition is to battle it out in the 200 crore club instead.

This is where the competition turns out to be fairly balanced, what with Aamir boasting of two (3 Idiots, Dhoom 3) and Salman (Kick)

along with Shah Rukh (Chennai Express) bringing on one each.

With Salman Khan out of picture till he strikes back with Bajrangi Bhaijaan next Eid, it all boils down to Shah Rukh and Aamir making their

Let's begin with Happy New Year first. The film looks big, really big, and that's where more than half the battle is won already. It has been

thousands for theater tickets. In that perspective, Farah Khan seems to have done her job well in coming up with the visuals that indeed make for

as safe as it gets.

Well, safe enough to cross the 200 crore mark. However, it's the overall content that gives the film a good enough chance to march into the 300

As for Aamir Khan, the start towards that milestone has already been made. A semi-nude poster has set the film well as a talking point five months

before it hits the big screen. However, and rest assured, from the combo of Aamir Khan-Rajkumar Hirani-Vidhu Vinod Chopra, one can expect PK to

be a film that lends an out of the world experience to the audience. If the shock value has done the trick, the content could pretty much ensure

that everything hits the roof.

From the man who has delivered three delightful films in a row (Munnabhai MBBS, Lage Raho Munnabhai, 3 Idiots), that isn't too much to

Now that by itself makes one truly believe that if the content is right, PK indeed has the potential to bring on the 300 crore club. With three

open weeks ahead of it (for now at the least), this Christmas release could well spell Diwali and Eid too for all involved, especially audience who

are already excited to check out what the film has in store.

Just like the 100 crore and the 200 crore club, would Aamir Khan turn out to be the founder of the 300 crore club as well?

Well, too many ifs and buts for sure! But then when the future doesn't seem to be distant, it is time to make preparations for it, isn't it?