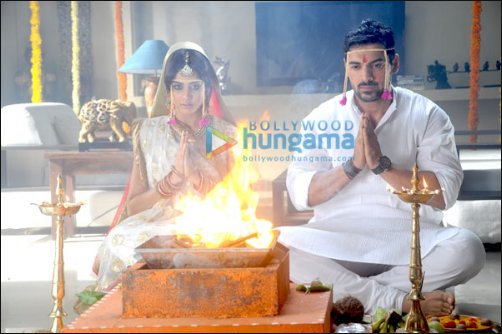 This was one pairing which was waiting to happen. After being â€˜castâ€™ together in the LG ad, the John-Genelia pair was just the toast and the talk of the town, which is now being toasted in Vipul Shahâ€™s Force.


And when people talk of dedication and getting into the role, this duo will not just take the cake, but the entire bakery as a whole! What happened was that John and Genelia were shooting for a wedding scene which required them to do the traditional â€˜saat pherasâ€™. Reports have it that they were actually â€˜stoppedâ€™ from finishing the saat pheras at the last minute. The reason? Well, news has it that ceremony conducted was so authentic that, by the time John-Genie completed the last round, they would have actually been pati-patni! The shoot happened in Malshej Ghat. Now for the twist! What actually happened was that whenever the filmâ€™s director Nishikant Kamath would say cut, the pandit just would not stop! Thatâ€™s when someone from the unit realized and the â€˜coupleâ€™ had to be stopped before the final round.â€


Talking about the incident, Vipul Shah said that pandit in the scene was a localite who could not understand the dynamics of the shoot and insisted on completing the pheras. Despite the many attempts to make him understand about the â€˜shotâ€™, he just wouldnâ€™t budge!


All in all, the shoot went on well! May we say, may the â€˜Forceâ€™ be with John and Genelia.