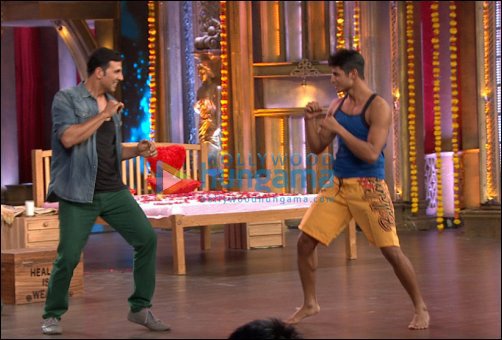 It's not every day in Bollywood that you get to meet and perform before that special someone who has been your role model, dreams and the reason behind your aspirations. But, when you do get a chance to do so, then certainly the sky becomes the limit for your excitement. The same was the condition of Akshay Nalawade (a contestant in the Zee TV's reality show Cine Stars Ki Khoj) when he met his idol Akshay Kumar on the show. It was indeed more than a precious moment for Nalawade when he met Akshay Kumar, who had come on the show to promote his upcoming comedy flick Entertainment along with his co-star Tamannaah Bhatia.

For starters, Akshay Nalawade had performed quite a few times behind Akshay Kumar at various award functions as a background dancer, but it was his dream come true moment to meet him person and perform an act for him. Akshay Nalawade even told (read 'confessed') to Akshay Kumar that he idolizes him and that he was his sole inspiration to get a black-belt in Taekwondo. Hearing this, Kumar was clearly touched.

And when Nalawade requested Akshay Kumar to come on stage and teach him a few Taekwondo tricks, Kumar immediately obliged and on public demand even did a face- off in a non-contact fight with the contestant! A few kicks and punches and Akshay Kumar proved why is he is the undisputed king of action! Needless to say that, Nalawade was quite pleased. Akshay Kumar, then, praised Nalawade for his spirited performance and said that he seemed all set to make his debut on the big screen and face the camera.

And when Tamannah saw the contestants go through jitters before performing on stage, learning dialogues and preparing for their act, she recollected her first shot for a south flick, where she had to speak in a language she was not fluent in. She said that she sat inside the washroom for three hours trying to learn that dialogue and finally managed to give that shot after number of takes! That time, Akshay too got nostalgic and he recalled about how he had worked so hard on his martial arts and acting to get that one break, but attributed his success predominantly to destiny.