The celebrations galore for the team of Race 3 as they celebrated the birthday of Arpita Khan Sharma's son Ahil Sharma in Abu Dhabi yesterday. Jacqueline Fernandez was seen recreating her chartbuster 'Jumme Ki Raat' from Kick along with Arpita Khan. 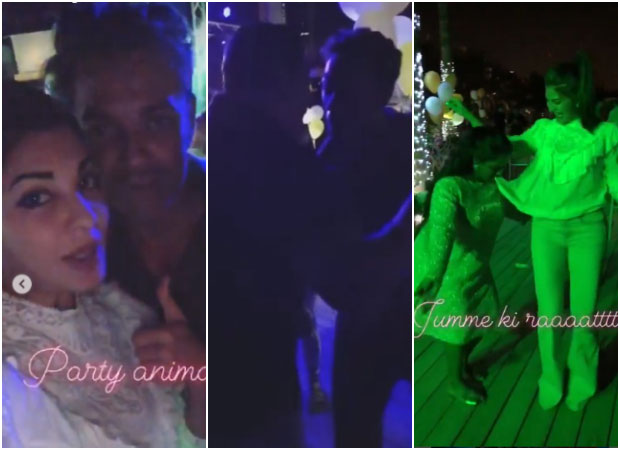 Marking the occasion of Salman Khan's nephew Ahil's 2nd birthday, the cast and crew of Race 3 put on their party shoes. Jacqueline Fernandez took to social media to give us glimpses of the crazy fun night. She and Arpita Khan Sharma recreated the iconic step of 'Jumme Ki Raat' from the Salman Khan-Jacqueline Fernandez starrer Kick.

Arpita was seen mimicking her brother Salman Khan in the song as the duo was goofing around. Holding Jacqueline's top in her mouth, Arpita danced along with Jacqueline. She was seen rocking the party along with Bobby Deol, Daisy Shah and Arpita Khan Sharma amongst others at the birthday celebrations of Ahil. The actress was also seen grooving to her chartbuster, 'Sooraj Dooba Hai Yaaro'.

Salman Khan was also seen grooving on the dance floor. He was dancing his heart out with Bobby Deol on Diljit Dosanjh's hit track, 'Do You Know'. It seemed like Bobby was enjoying the night to the fullest. He was one of the guests who did not leave the dance floor.

Meanwhile, on the work front, Race 3 brings back the super hit Jodi of Sajid Nadiadwala's Kick. Salman Khan and Jacqueline Fernandez are seen sharing screen space for the second time. Starring an ensemble cast of Anil Kapoor, Bobby Deol, Saquib Saleem and Daisy Shah, the action thriller is undoubtedly one of the most awaited films.