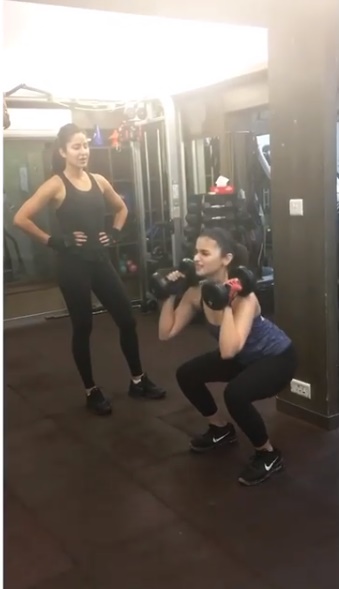 Katrina Kaif and Alia Bhatt have become quite close friends since the Dream Team Tour last year. The actresses are often spotted together hanging out at the parties. They also happen to be fitness enthusiasts and train under the same physical training expert, Yasmin Karachiwala.

On Sunday, Katrina Kaif and Alia Bhatt decided to train together but their trainer reached late. So, Katrina decided to take the charge and turned into a strict trainer for Alia making her do squats. In a hilarious video, Katrina is counting as Alia is squatting. She captioned the video, “This is what happens when @yasminkarachiwala doesn’t show up ….. you’re doing good @aliaabhatt …. don’t worry only 300 more squats …. #whatarefriendsfor #gymlife” indicating how she took charge when her trainer did not come.

Both Alia and Katrina shared a couple of Instagram stories after Yasmin Karachiwala reached their gym. They were seen exercising together.

On the work front, Alia Bhatt wrapped up Meghna Gulzar's Raazi which is scheduled for May 2018 release. Katrina Kaif recently returned from Greece after wrapping up Tiger Zinda Hai. The film, starring Salman Khan, is scheduled for December 22, 2017.

This is what happens when @yasminkarachiwala doesn't show up ..... you’re doing good @aliaabhatt .... don't worry only 300 more squats .... #whatarefriendsfor #gymlife