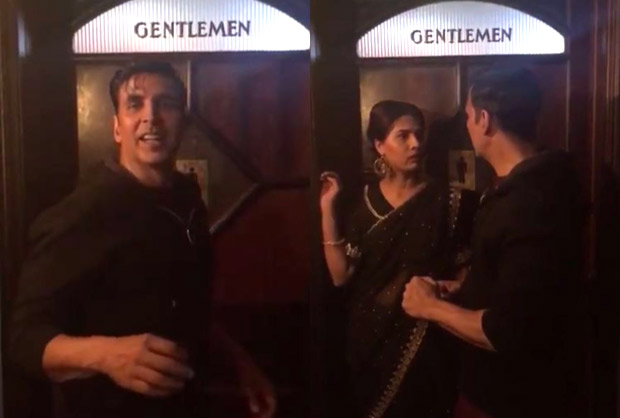 Sidharth Malhotra and Jacqueline Fernandez's upcoming film A Gentleman is all set to hit the theatres this Friday. The lead actors are leaving no stone unturned in the film's promotions. Ahead of the film's release, they have received a huge support from none other than Akshay Kumar.

Akshay Kumar, who had earlier worked with Sidharth Malhotra and Jacqueline Fernandez in Brothers, shared a hilarious video promoting their upcoming film, A Gentleman. In the short clip, Akshay is seen heading towards the men's washroom. He, then, clarifies that he is not promoting his recent successful film Toilet- Ek Prem Katha but instead Sidharth's A Gentleman. However, it is hilarious to watch happens when he tries to enter the washroom. He captioned the video as, “Smart.Suave.Thorough. Watch out for @s1dofficial in and as #AGentleman with the lovely @jacquelinef143 this Friday at a theatre near you :)”

Akshay Kumar is just returning the favour. Before Toilet- Ek Prem Katha's release, Sidharth Malhotra had also promoted the movie with a hilarious video made with Akshay which was inspired by comedian-actor Gaurav Gera's popular Shopkeeper-Chutki series of jokes.

Directed by Raj Nidimoru and Krishna D K, A Gentleman also features Suniel Shetty and Darshan Kumar in key roles. It is slated to release on August 25.

‪Smart.Suave.Thorough. Watch out for @s1dofficial in and as #AGentleman with the lovely @jacquelinef143 this Friday at a theatre near you :)‬