Yesteryear's’ screen queen Mala Sinha lip-synced innumerable hits of Lataji in films as wide-ranging as Anpadh and Neela Akaash. Heartbroken at the demise of a singer whose voice in many ways, defined the actress’ career says she was always inspired by Lataji. “Kabhi socha bhi nahin ttha ki filmon mein kaam karungi. I didn’t want to be an actress. I wanted to be a singer. Right from childhood I would copy Lataji’s songs like ‘Jiya Beqaraar Hai’, ‘Hawa Mein Udta Jaaye’, ‘Aayega Aanewala’, ‘Barsaat Mein Tumse Mile Hum’... right down to most minute nuances in her singing.” 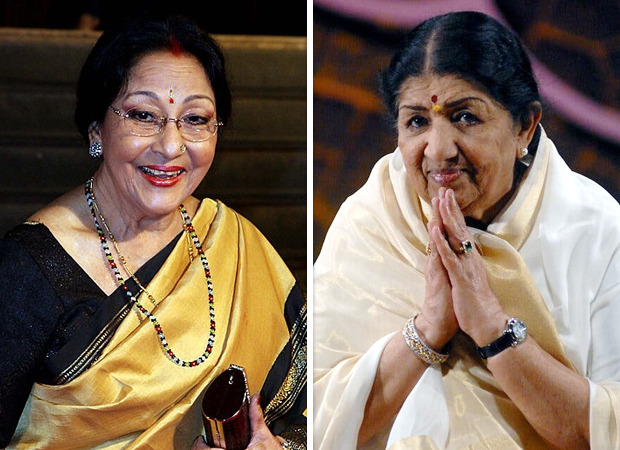 “I wanted to become a singer like Lata Mangeshkar” – Mala Sinha

Instead Mala Sinha became a very popular actress of the 1960s. “How was I to know that one day Lataji would sing for me...some of her best songs like ‘Aapki Nazronne Samjha’, ‘Neend Kabhi Rehti Tthi Aankhon Mein’ and ‘Ja Re Udd Ja Re Panchi’ were sung for me. I feel blessed.”

During childhood Mala Sinha was known for her renditions of Lataji’s numbers. “As a child I lived in Bhawanipur in Kolkata. I was known in Kolkata as ‘Baby Lata’.I’d be called for singing at Durga Puja or at birthday parties. I wasn’t a trained singer. I had a god-gifted ability to sing. My ear was so sharp that I’d pick up Lataji’s songs immediately. I loved to sing. Baba (dad) would bring home a single of Lataji’s every day. Those days’ singles were released on wax records. After I’d return from school the first thing I did was to listen to Lataji’s song. Forget I Pods there were no cassettes even (laughs). I was so attached to my record player I brought it to Mumbai when I came here to pursue my career. I don’t know woh kahan chala gaya kisne uda liya. I’ve lost so many things in life.”

Speaking of the wide repertoire of songs that Lataji ghost-voiced for Mala Sinha, the actress chuckles through her grief. “She more my dost-voice than ghost -voice. I had a deep emotional connection with her voice. The minute she sang for me I transformed on screen.”

The acclaimed actress remembers many of Lataji’s song with acute affection. “One of my first songs sung by Lataji was the hard-hitting ‘Tu Mere Pyar Ka Phool Hai’ about unwed motherhood in Dhool Ka Phool. The entire theme of the film was expressed by Lataji in that one song. I could never hear that song without crying. I think the great Sahir Ludhianvi wrote that amazing song. After that the hits just flowed: ‘Ja Re Udd Ja Re Panchi’ in Maya, ‘Aapki Nazron Ne Samjha’ in Anpadh, ‘Balma Anari Mann Bhaye’ in Bahurani, ‘Meri Aankhon Se Koi Neend Liye Jaata Hai’ in Pooja Ke Phool, ‘Milti Hai Zindagi Mein Mohabbat Kabhi Kabhi’ in Aankhen, ‘Neend Kabhi Rehti Tthi Ankhon Mein’ in Aasra, ‘Kankariya Maar Ke Jagaaya’ in Himalay Ki God Mein, ‘Dhol Sajna’ in Maryada…Oh , and I adore the songs that Lataji sang for me in Jahan Ara.

Growing emotional Mala Sinha says, “Matching up onscreen to the emotions that Lataji expressed was always a challenge. Woh kitna kuch keh jaati tthi apne ganon mein (she said so much in her songs). It was like being swept into an ocean of emotions. If we heroines looked so beautiful on screen it was because Lataji sang for us.”