Varun Dhawan adores his pet dog Joey a lot! The Badlapur actor has often posted glimpses of his pet on the gram. This time, his wife Natasha Dalal also joined the fun moments. 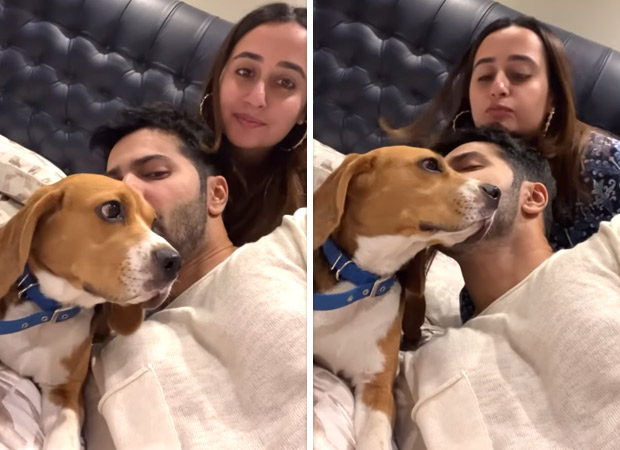 Varun Dhawan gets all cuddly with his adorable beagle Joey, Natasha Dalal joins them

In a new Instagram reel, the short clips featured Varun bonding with his beagle while his wife Natasha Dalal was also a part of it. In the first part of the video, Joey is seen smothering kisses to Varun with Natasha also joining in. The pet dog euphorically jumps on the bed and runs at the beach in the next part of the video.  The actor posted the reel with the song ‘Tere Jaisa Yaar Kahaan’ from the movie Yaarana playing in the background. The video received a lot of adorable comments from Bollywood stars Anushka Sharma and Arjun Kapoor. Varun Dhawan recently posted a picture with Joey in his arms with a caption that read, “Because of you I laugh a little harder, cry a little less, and smile a lot more.”

Professionally, Varun Dhawan was last seen in Coolie No. 1 which was released in OTT also starring Sara Ali Khan. The actor will next star in Jug Jugg Jeeyo. The comedy-drama, which also stars Kiara Advani, Anil Kapoor, and Neetu Kapoor, is set to release in theatres on June 24, 2022. The actor will also star in Bawaal with Janhvi Kapoor and Bhediya with Kriti Sanon.