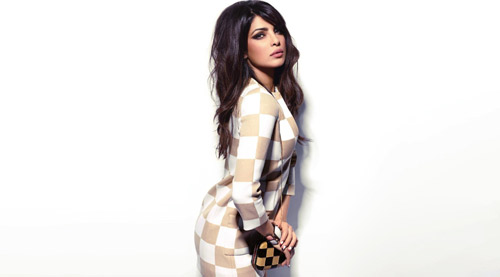 From saying no to the unfaithful wife's role in Sanjay Gupta's Musafir to blissfully sinking her decalcified teeth into the role of a woman who kills seven husbands and gets away with murder, to playing the warrior in Mary Kom and the warrior's wife in Bajirao Mastani, Priyanka Chopra has come a long way.

Sameera Reddy finally played the wanton wife who cheats on husband Mahesh Manjrekar when stranger Anil Kapoor (with streaked hair, the stranger couldn't get any stranger) strays into town. After seeing Musafir I asked Priyanka Chopra why she had said no to it.

"Did you see Mahesh Manjrekar saying, 'Blouse khol' to his wife?" Priyanka retorted. She didn't sound shocked or scandalized, just amused. We both burst out laughing.

It's rare to find Priyanka making a politically incorrect statement even as a joke. Earlier, I'd tease her about being the new Rani Mukerji who always made sure she said the correct things. "That's good, na. Rani is so good at her job and so successful."

The comfort-zone is a place that Priyanka Chopra is very sure about. She won't say no to a role because it requires body exposure. She carries off the micro-mini-est of dresses with panache because she's confident that her legs talk. But she isn't comfortable flaunting cleavage. If the character says and/or wears things that seem odd she would say no to it. And no amount of money would cajole her to reverse her decision.

Priyanka is the most obdurate actress I've come across. She gives you a long rope as a journalist. But if she's put off she takes a long time to come around. "Write what you want as long as it isn't slanderous or damaging," she once told me. At that time she was trying to make things work for her with Shahid Kapoor who had issues regarding her friendship with other men.

An article I wrote on Priyanka and Gerard Butler messed up things even more between Shahid and Priyanka. It took her a long time to get over that one. It messed up her plans for her heart. Priyanka always has a game-plan which I suspect, is hidden away even from God.

In her early days in the film industry Priyanka was not so sure of which way to go with her career. The hunger to excel was always there. In the mornings before shooting started for her first few films (The Hero with Sunny Deol, Andaaz with Akshay Kumar) she attended Kathak and yoga classes. That's when she would call from her car.

"You don't call me. You've bigger heroines to talk to," she would say and laugh throatily. In that laughter was secreted the self-confidence that she too would make it big in no time at all. Priyanka had set an actual time-frame for herself during which she was sure she would get to the top.

In those early days, her father would often negotiate projects for Priyanka. J.P Dutta was casting for Umrao Jaan. Both Priyanka and her dad were very keen that she gets the part. J.P quietly signed Aishwarya Rai Bachchan. Not once did I hear Priyanka bitch or crib about the injustice of it all. And neither did she gloat when Umrao Jaan eventually turned out to be a fiasco. Come to think of it, many parts that Priyanka has instinctively turned down or the ones that have been snatched away have turned out to be turnips at the turnstiles.

I once told her she is blessed. "Not blessed," she laughed throatily. "I work hard. And I've a good judgement of what works for me."

In all the time that I've known her I've never heard Priyanka Chopra bitch about any of her competition. Not Aishwarya, Kareena..
. not even Katrina. It's always others who have felt threatened by Priyanka.

"I think women and men see something predatory about me," she had languidly meowed to me. Before I could react she had burst out laughing.

The thing about Priyanka is, she is far more street-smart and far stronger than all her competitors. Kareena thinks with her heart. Priyanka doesn't let her heart dictate her decisions. I've seen her go through the best and the worst of times. She remains firm on her ground, no matter how slippery it gets.

Unarguably her worst time so far was when her father fell ill. On the day after she found out his condition, she was on the sets of Bluffmaster shooting normally. No one had a clue about the turmoil she was going through. In the evening when her co-star Abhishek Bachchan was on the phone with me I mentioned Priyanka's pain to him. That was the first he heard of it.

"Why should I burden those around me with my pain?" she asked me. "I'm sure they've their own worries. I've mine to deal with. I wouldn't like it if they started unburdening their problems on me."

Today Priyanka has shaped into one of those actresses who are good at her job very successful and very very dependable. When a director signs her he signs an all-rounder...with some delectable curves thrown in. Ask any filmmaker. He'll tell you why he wants Priyanka for his film, regardless of the nature of the part.

The other day I was speaking to a director who was going through the list of actresses for his next film. "I wanted Kareena for the part. But she has changed so much in appearance. The Kareena in Kambakkht Ishq is not the same girl I loved in Refugee and Jab We Met. She has...changed. As for the others, they are flush with good and bad points. But none qualifies as a complete package like Priyanka. Today she's in a position to play any character. She loves challenges. And she's physically and emotionally equipped to handle them."

It hasn't been easy getting here. When Priyanka Chopra and Lara Dutta came into the film industry simultaneously it was Lara who was seen as the potential star. Priyanka raced ahead, not just because of her talent but impeccable PR. She has the ability to be naturally charming to people around her. Being Ms Congeniality is not a role for her. It's part of her, just like being a good sister, a good daughter and a good girlfriend.

She doesn't talk about her relationships, and there's a reason for it. Eons ago before she became a star she was seeing Aseem Merchant. She moved on. People continued to refer to Aseem as 'PC's boyfriend'. Priyanka didn't want Harman Baweja to go through the same humiliation.

Priyanka is the female Shah Rukh Khan, and not only because she doesn't get along with Salman Khan. Like SRK, PC genuinely believes she is in competition only with herself. Each time when she signs on to endorse a brand she checks to see herself in the mirror, and not the zeroes on the cheque. With success she has transformed physically. Her legs are longer. Her cheekbones are sharper. Her nose is more aquiline and her teeth whiter.

It hasn't been easy getting here. I don't know whether she knows this (and I've never told her). But one of her co-stars secretly referred to her as 'Dark Side Of The Moon'. He would often make fun of how she looked without makeup.

Yup, things have changed. With or without makeup, Priyanka lights up the screen the way Shabana Azmi did 25 years ago. After seeing her in her latest film Gulzar said, "She looks beautiful even when she grows old in the film."

In real life too Priyanka would be comfortable with wrinkles and grey hair. She doesn't shy away from peeping into the dark side of the moon. She isn't fearful of ugliness. Not as an actor. Not as an individual. She has yet to learn how to bitch about her co-stars. But what the heck! No one is perfect. Not even Priyanka Chopra.