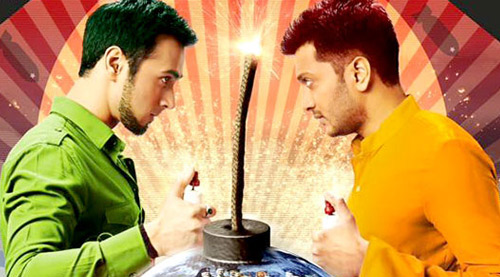 Almost two months before a film's release, the makers ensure that their film gets all the required coverage from the media and attention from the masses. However, that is just a part of the pre-release promotions. From the music of the film to the events to interviews, there are many factors that go into the PR strategy of 'film promotions'. However, all these efforts get their required due only if the film has a recall value in the audience's mind. Even the A-list starrers are required to follow this system in order to have a 'successful' Friday.

This week, we will see the release of Bangistan starring Riteish Deshmukh and Pulkit Samrat and directed by the former film critic Karan Anshuman. However, the film surely seems to be on a shaky ground...pun intended.

On a general note, Bangistan hasn't been able to create the kind of hype that the film should before its release. During the release of the recent blockbusters like Bajrangi Bhaijaan and Bahubali, there was enough hoopla among masses who were eager to watch these films on the big screen. This curiosity element seems to be completely missing when it comes to this satire named Bangistan.

Moreover, yet another reason for the lack of curiosity could be the late promotions. Though the film was in the news when its first promo came out, it later lost the fizz owing to the delayed and untimely promotions. As we have mentioned before, promotion is the key factor that decides the success rate of the film in the current times. Hence, it is important for the makers to start their promotions way ahead of the release.

Delayed promotions lead to disinterest and even lack of awareness because of which Bangistan has no buzz at all. Add to that, the pressure on the film has increased, after Bahubali recently crossed the 100 crore mark while Bajrangi Bhaijaan is on its way to enter the 300 crore club. With the soaring success of two major Bollywood films, Bangistan has to deal with stiff competition in order to survive the box office.

Not just this. It's a rare scenario to see a film's release being pushed to a different date, just a few days before the scheduled date. Bangistan too met with a similar fate, considering the release of Drishyam. Drishyam came out with a lot of expectations considering the Malayalam version of the film was a huge success. Facing a Salman Khan starrer, an Ajay Devgn film and a record breaking South blockbuster, there was no option but to postpone the release of Bangistan due to lack of screen space at the multiplexes. And this week, Bangistan will face international blockbuster franchise movie, Tom Cruise's Mission Impossible: Rogue Nation at the box-office, again a very tough competition.

Talking about the current scenario, a leading trade source said, "The movie (Bangistan) has not generated any hype at all. The content does not look captivating and the distributors have started feeling the heat. The promotions have been low key and there is absolutely no visibility on all the vectors - be it television, print, outdoor or internet. The music has also not worked as well. The makers also don't seem confident about the movie and hence they are not spending on publicity. Going by this trend, we expect lesser footfalls and opening of around 15% on the opening day. Anyways, the movie is not even expected to collect Rs. 15 cr net at the India box office. The distributors will lose money in this product."

In recent times, social media has played an important role in making many movies successful. Hence, in order to gauge the social awareness of Bangistan, we checked the official pages and got the following data.

Facebook page of Bangistan has 120K 'likes' which is quite low compared to popular films. In fact, Sunny Leone starrer Kuch Kuch Locha Hai had 115K 'likes' on its page. Bangistan has only 2K followers on the micro blogging site Twitter. While most of the films brag about crossing the 1 million mark of views on YouTube, none of the song promos of this film have managed to reach or cross the mark, except the film's trailer.

The music of the film too hasn't lived upto the expectations, despite being strongly pushed by T-Series, which has adversely affected the popularity of this Excel Entertainment production. Moreover, many other social networking sites including 'Google Trends' are facing a similar cold response when it comes to the film.

Ironically, film's director Karan Anshuman was known for being a harsh movie critic who attacked movies and filmmakers going hammer and tongs about the content. It's ironic now though that he himself seems to be struggling to impress audience as he got everything else going for him starting with good banner, good actors, strong team etc. However, the content of his film seen in the promotions has failed to impress or generate any laughter.

Despite its poor promotions, lack of screen space and no interest among the masses, the makers are currently hoping to salvage Bangistan. Let's hope that their efforts do not go waste and the film is able to post at least respectful numbers at the box office.