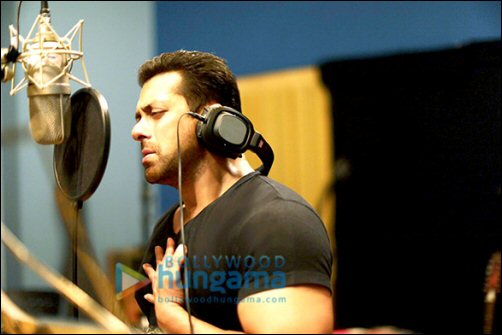 Salman Khan's last number 'Hangover' which was sung by the superstar himself, turned out to be one of the top chartbusters of 2014. Now yet again the superstar has

decided to sing for his production Hero.

Salman Khan will be crooning for the romantic song titled 'Main Hoon Hero Tera' which is also the title track of the film. Here's an exclusive image of Salman Khan recording for the song.

Apparently, when Salman Khan heard the original song he loved it so much that he expressed the desire to sing it himself. The actor recently recorded an acoustic version of it. Apart from lending

his voice, buzz is that he will also feature in the music video of the song, which will be out soon.

Hero, a remake of a 1983 film by the same name, is produced by Salman Khan and Subhash Ghai and directed by Nikhil Advani. The film marks the debut of Aditya Pancholi and Zarina Wahab's son

Sooraj and Suneil Shetty's daughter Athiya and is slated to release on September 11, 2015.