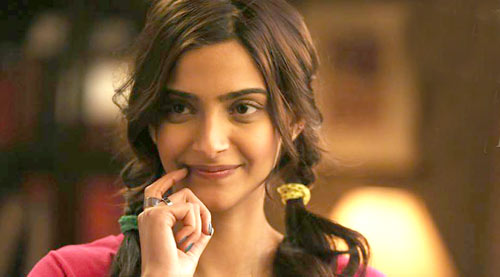 Have you seen Sonam Kapoor groove to 'Engine Ki Seethi Maro Bum Dole'? Of course, you have. It's the latest Bollywood chartbuster from the film Khoobsurat which released this week.


As sweet and lively is the music, wish we could the same about the lyrics. 'Driver chal mat haule, hauleâ€¦'Patri tharr tharr kaanpe'â€¦'Phak phak engine bol raha hai' are some of the lines in the song. If you think this song is only about an 'engine and train' then listen again! Under the pretence of engine and train, the song has enough double meaning stuffed in its suggestive lyrics.


Though it is a known fact that double meaning songs been a part of Bollywood films, the trend took off strongly in the 90s. Interestingly, Sonam is not the first Kapoor to do a naughty train song. It was in fact her father Anil Kapoor who danced on 'Main Maal gaadi, tu dhakka laga' back in the 90s.


But the list doesn't end here! From Kareena Kapoor to veteran Mithun Chakraborty most Bollywood stars have a few double meaning songs to their credit! Starting from the most recent one, let's look at some of Bollywood's 'dirty' songs with double meaning lyrics.

2. 'Main Maal Gaadi' (Andaz): And if Sonam is singing about Engine, her dad Anil Kapoor did an even dirtier song with a 'Maalgaadi' back in the 90s. Anil Kapoor and Juhi Chawla celebrate their honeymoon with their naughty song that has lyrics like 'Main maalgaadi tu dhakka laga'. And if the lyrics in the song left any empty gaps, the choreographer happily filled it up with the suggestive pelvic thrusts.

3. 'Rukumani Rukumani' (Roja): We guess the words say it all in this song: 'Rukumani Rukumani Shaadi Ke Baad Kya Kya Hua?' A R Rahman may have gained all the accolades for his debut in Bollywood but this song that showed grandmas singing lyrics like 'Khatiya bhee dhire khat khat hone lage, aage piche huwa toh jhatpat hone lagi' did come as a shock to many.

4. 'Chad Gaya Upar Re' (Dalaal): Mithun Chakraborty was seen in this song along with the then popular actress Ayesha Jhulka as the two are lying on a haystack with love blossoming between them. Amidst this romantic moment comes the song 'Chad Gaya Upar Re Atariya Pe Lotan Kabootar'followed by a series of expressions and sounds that goes like 'eeâ€¦ ooo.. aahâ€¦' in Ila Arun's voice. Well, if that wasn't enough, adding to the shock value are the over enthusiastic dancers who seem to do a lot more than just shaking just their leg.

5. 'Choli Ke Peeche' (Khalnayak): Madhuri Dixit acquired fame with this song and she is still asked to perform on it. She is graceful and pulled off this dance with equal sensuality but surely that does change the meaning of the words: 'Choli ke peeche kya hai, chunari ke neeche kya hai'

6. 'Aanchal Ke Andhar' (Khalnayika): His son starred in one of the most famous sex comedies Kyaa Kool Hain Hum. However, Jeetendra too did some dirty dancing in the film Khalnayika in the Holi song 'Aanchal ke andhar kya hai'.

7. 'Sexy Sexy' (Khuddar): In the 90s, Karisma Kapoor took a bold move of dancing to the number 'Sexy sexy sexy mujhe log bole' and the Censor Board immediately chopped off the word 'sexy' and replaced it with 'Baby' after few protests. But that did not tone down the essence of the song and it still falls it the dirty song list.

8. 'Sarkaylo Khatiya' (Raja Babu): Govinda may have an impeccable comic timing but many of his songs were designed to be dirty double meaning tracks. However, we decided to pick the most famous one. 'Jaade mein balma pyara lage, Suyi chubhe koi shola sa badke'. As Karisma says, it surely sets a lot of things on fire!

9. 'Tu Ru Tu Ru' (Elaan): Dancing around the trees has been one of the common trends in Bollywood songs. Right after romance started to develop between Madhoo and Akshay Kumar in Elaan, they start dancing on a song where Akshay constantly asked 'Kahan se karun main pyar shuru' (Translation: From where should I start making love). Does anyone want to answer that question?

10. 'Gup Chup Chup' (Karan-Arjun): Karan-Arjun had Salman Khan and Shah Rukh Khan playing brothers and it surely attracted people with its music. Amidst romantic and peppy dance numbers, there was this song that Mamta Kulkari dances to, distract the villains, while the heroes are busy executing their plan. Well, 'Gup Chup Chup' had Amrish Puri and the rest of the goons staring Mamta with lecherous eyes as she describes her night with her behnoyi (brother-in-law/sister's husband).

11. 'DK Bose' and 'Penchar' (Delhi Belly): Say 'DK Bose' repeatedly in a loop and voila, you get a new word! And yes sounds exactly like your favourite cuss word in Hindi, doesn't it. This song had catchy peppy lyrics and despite criticisms, it managed to gain popularity and get enough attention for this medium budget English language film. Another song in this film called 'Penchar' was a qawaali number that sounded like the other Hindi cuss word. Yes you got it.

12. 'Bittoo Sabki Lega' (Bittoo Boss): This one surely grabbed the attention of the Censor Board. This song, which was a promotional video for Pulkit Samrat's launch vehicle Bittoo Boss, starts with two women conversing over whether 'Bittoo Boss unki lega ya nahiâ€¦.. arre PHOTO.' Dirty mind!

13. 'Pritam Pyare' (Rowdy Rathore): 'Palu ke neeche chupake rakha hai udadoon toh hungama ho' are the lines that dancers like Shakti Mohan, Maryam Zakaria and Mumaith Khan groove to in Rowdy Rathore. It may be a very popular chartbuster but that doesn't change the fact that it is a song that our stringent Censor Board conveniently overlooked.

15. 'Mooh Me Le Mooh Me Le' (Jeena Hai Toh Thok Daal): Being one of the most controversial song of Bollywood, 'Mooh Me Le' has one of the most explicit lyrics. Though the film was not a hit, the song faced a lot of wrath from conventional political leaders and the Censor Board. So we think the makers were bold enough to give it back to the censors in the same language!

17. 'I Am A Hunter' (Gangs of Wasseypur): The songs in Gangs of Wassepur were as different as the movie itself. This song is surely the quintessential double meaning song which talks about a woman wanting to see the man's 'gun'! Nothing has been left for imagination anymore.

18. 'Laila Teri Le Legi' (Shootout At Wadala): Sunny Leone in an item number was the point of focus in 'Laila Teri Le Legi'. Though most part of the song falls into the typical raunchy number category with words like 'maal', the line 'Laila Teri Le Legi' did stir some trouble for the film. Though Censor Board made the makers change the line to 'Laila Tujhe Loot Legi' in certain parts of the song, it had already become popular among the audiences with its naughty double meaning lyrics.

19. 'Tooh Tooh' (Gori Tere Pyar Mein): According to the makers of this song, it is a simple song that in English means 'Shake Your Booty.' Yes it would have remained that way only if it did not give a detailed picture of how the butts of drunk Punjabis looks like. Adding to the woes, there are larger than screen bums of middle aged aunties occupying the camera when Kareena Kapoor was describing them as 'gore gore', 'naughty naughty', 'round round' toohs!

20. 'Don't Touch My Body' (Bullett Raja): This Saif Ali Khan and Sonakshi Sinha starrer had an item number featuring Mahie Gill. The song titled 'Don't touch my body', had Mahie Gill grooving to it in a sexy ghagra choli begging her saiyaan to not touch her or else she will burn his 'gadda' and 'takiya'. With Censor Board being stringent about intimate scenes in Bollywood, the songs do the dirty describing in detail!