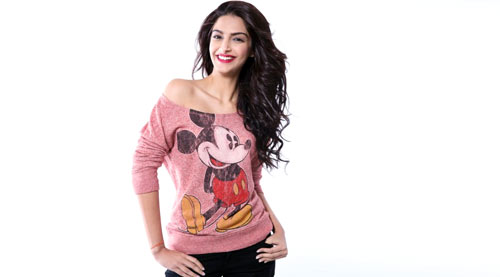 Sassy Sonam storms city after city to promote Khoobsurat. She takes a break to talk to Subhash K Jha


How does it feel to be the hero of Khoobsurat?

I don't feel I am the hero of the film. I think the producer, director and the writer are the heroes of every film. I can never take credit for a film's success. Likewise please don't blame me if a film fails. A film is a team effort. All of us sink or swim together.


You're promoting Khoobsurat more rigorously than any of your other films?

Oh God, tell me about it! I am traveling from city to city with a very bad viral attack. Different food, different water in different cities! My timings are ridiculous and hectic. I am getting just a few hours of sleep.


Are you more protective of Khoobsurat because it's a home production?

Not really. Since Khoobsurat is a smaller film we decided to go all-out for it. If you are selling a product you must let the consumer believe that you completely believe in the product. That is why we are doing aggressive marketing.


Do you think if Hrishida were alive and he saw your Khoobsurat he would be happy?

I'd be very nervous if Hrishida saw our Khoobsurat. It is an ode to him. It's like writing a fan letter to someone whom you truly admire. We named the film after his film. We named my character Mili after another film of Hrishida. And my screen-mom Kirron Kher is named Manju after Rekha's character in the original Khoobsurat.


Why did you feel the need to remake a Hrishikesh Mukherjee film?

We essentially felt a lacuna in the entertainment being provided by our film. That space of innocent laughter that Hrishida's film once occupied is now vacant. Where are those simple happy films like Guddi and Jhooth Bole Kauva Kaate that Hrishida made? We wanted to revive the cinema that makes you smile, makes you laugh, makes you love and makes you believe in all the good things in life.

Do you believe that such a world still exists?

Of course it does! We hope to bring back the kind of positive energy that Hrishida brought to Indian cinema. Our Khoobsurat is dedicated to Hrishikesh Mukherjee, with love. Lots of it! It's meant to make the audience happy.


Sonam , you seem to have shed your inhibitions in front of the camera. Khoobsurat sees you going wild in that 'Engine ki Seeti' song.

That's not me. That's my character. I doubt you'd see me breaking into 'Engine ki Seeti' in real life. I like to play a different character each time. I've never played someone like Mili before, and I don't know if I'll play someone like her again. Just like Zoya my character in Raanjhanaa. She was someone I had never played before. I don't think I'll play her again. Even the characters I play in Dolly Ki Doli and Prem Ratan Dhan Payo are completely removed from what I've done so far. I don't like repetition. I am making a conscious effort to play characters who are different from one another.

Working with Salman and Soorajji has been an amazing experience. There is so much positivity and thehrao during the shooting. I can't describe how peaceful I feel when I am on the sets of Prem Ratan...


How different is Sooraj Barjatya from Sanjay Bansali?

You know I am so blessed. In just seven years I've worked with the best directors from Sanjay Bhansali to Rakeysh Mehra to Aanand Rai to Sooraj Barjatya. And Shanshanka Ghosh is also an amazing director. That such a varied spectrum of terrific directors have so much faith in me is a very reassuring feeling for me. Their approval is a great validation for me. I may come across as a very confident person. But when it comes to my performances I am extremely self-critical and unsure. I feel I have a long way to go.

But isn't that the only way to grow?

I guess so. I am so fortunate that these directors believe in me. I am a director's actor. They helped me on my journey. Sanjay and I haven't worked together after Saawariya. But we are connected constantly. Every time he sees something of mine on television he messages me. Rakeysh Mehra is there for everything I do. Shashanka is so protective of me. If anyone says anything about me he messages me. I am quite blessed with my directors and my co-stars.


Who are the people to have seen Khoobsurat so far and what's their reaction it?

My dad obviously loved it. It's a really sweet film. But when my mom who is unsparing in her opinion said she liked it I felt confident about the film. Satish Uncle (Kaushik) saw it. I want to show it to Sanjay Bhansali. He was my first director and his opinion matters a lot to me. I've called him and I'll show him my film as soon as I'm back in Mumbai. I also want all my friends to see it.


From Saawariya to Khoobsurat, do you see a growth in yourself as an actor?

Very honestly I feel I've gotten better with every film of mine. If I started at 1.2 I've now gone to 1.7. I've a really really long way to go. I still need to find that one role which would define my character. I am more excited by the journey than the destination. That's the way I am. I am always looking forward to seeing what the future holds for me.


What are your immediate future plans?

I start shooting again for Prem Ratan Dhan Payo from September 21. And my sister Rhea immediately starts another film.