The Throwback Thursday trend is pretty famous amongst celebrities. They often share old pictures and share their memories from the past. The celebrities love to share pictures from childhood, old photoshoot days and events. Ranveer Singh, who is known for his quirky throwback Thursday pictures, today shared the cutest picture with the legendary Dharmendra. 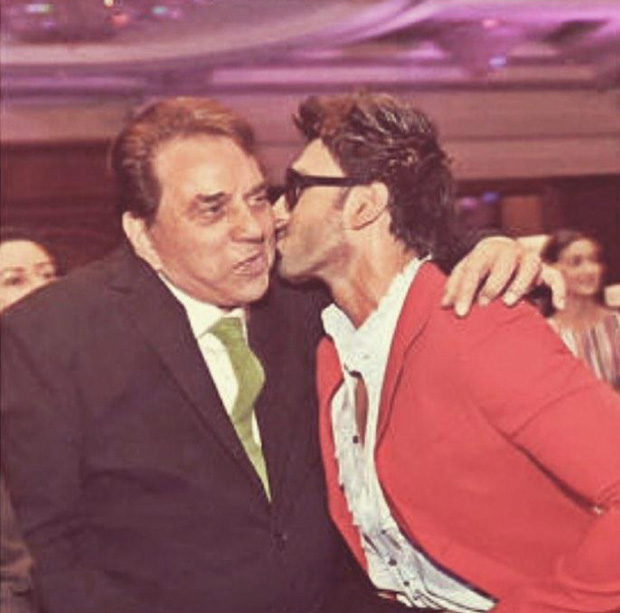 In the old photograph which looks from an event, Dharmendra is smiling and looks amazing in a black suit whilst getting a sweet kiss from Ranveer Singh. Ranveer, following his quirky fashion statement, is seen in an orange suit. He simply filled the caption with emojis and wrote, "@aapkadharma #oneinamillion."

On the work front, Ranveer Singh is completing Simmba in full swing. Reliance Entertainment presents, Rohit Shetty Picturez and Dharma Productions, Simmba stars Sara Ali Khan, Sonu Sood and Ashutosh Rana. The film is slated to release worldwide on December 28, 2018. He will be next seen in Gully Boy alongside Alia Bhatt. Directed by Zoya Akhtar, the film is scheduled to release on Valentine's Day next year. He is also set to star as former Indian Captain Kapil Dev in Kabir Khan's '83.

Dharmendra, on the other hand, is returning with the third instalment of his comedy franchise titled Yamla Pagla Deewana Phir Se. Directed by Navanait Singh, the film stars Sunny Deol, Bobby Deol and Kriti Kharbanda. It is set to release on August 31, 2018.