The Throwback Thursday trend is pretty famous amongst celebrities. They often share old pictures and get nostalgic about their childhood days. Arjun Kapoor is one such actor who often shares moments from his childhood that are very dear to him. The actor is not only close to his family but is close to some of the other star kids as well. Following the trend, Arjun shared a photo with Ranbir Kapoor and Siddhanth Kapoor which is absolutely adorable. 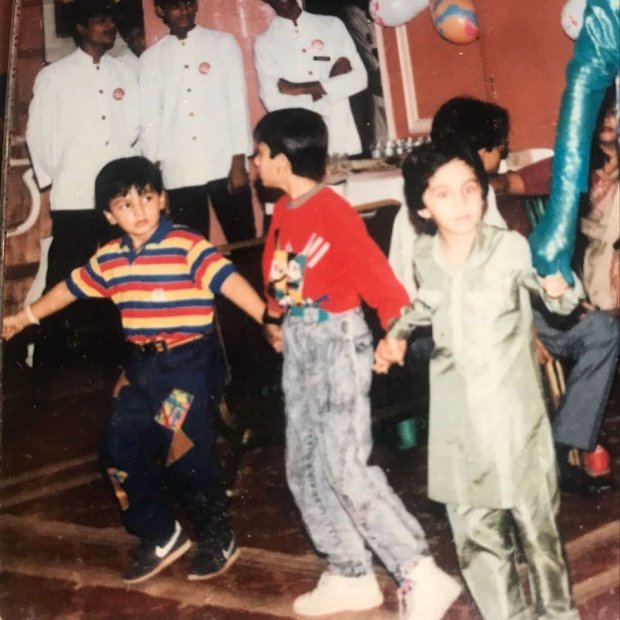 Arjun Kapoor, on Thursday, shared a photograph from the parties that were thrown by Shakti Kapoor at his residence. These used to be garden parties for his kids- Siddhanth Kapoor and Shraddha Kapoor. Arjun shared a moment from one of these parties in which Ranbir Kapoor and Siddhanth can be seen holding hands with Arjun. Dressed in sneakers, printed t-shirt and denims, Arjun not only appreciated those garden parties but made fun of Ranbir's high waisted denims. He poked fun at his sneaker style from those days and said he always knew about the sneaker trend that would be a rage in 2018.

Arjun Kapoor captioned the photo, "Was quite aware of the 2018 sneaker trend even in the early 90s!!! #icanseethefuture #timetraveler. @SiddhanthKapoor & @ShraddhaKapoor's garden birthday parties were as well attended as award shows as u can see... #Ranbir's jeans were a tad bit too high waisted if u ask me though."

Meanwhile, on the work front, Ranbir Kapoor is looking forward to the teaser release of Sanjay Dutt’s upcoming biopic titled Sanju which is releasing in April 24. Directed by Rajkumar Hirani, the film is slated to release on June 29, 2018.

Arjun Kapoor, six years after their first film together, is returning with Ishaqzaade co-star Parineeti Chopra in Namaste England. The film has been preponed and will now release during Dussehra 2018. Before that, they will come together for Dibakar Banerjee's Sandeep Aur Pinky Faraar.