Bollywood’s wedding season continues in 2019 and it began with a bang. Starting the year with the Bhatts, filmmaker Mukesh Bhatt and Nilima Bhatt’s daughter Sakshi Bhatt got hitched on January 25 to her longtime boyfriend Mazahir in an intimate ceremony followed by a grand reception. The who’s who of Bollywood came for the reception. But, it was the Bhatts and their extended family who stole the show. 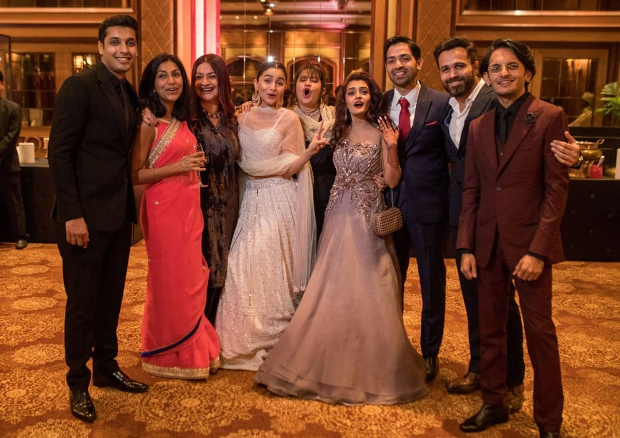 While many pictures were shared by Pooja Bhatt, there's definitely one family picture for archives. Shaadi Squad shared a photo of Sakshi Bhatt with all her cousins including Alia Bhatt, Pooja Bhatt and Emraan Hashmi. Alia wore a silver lehenga to the wedding while Emraan looked dapper in a suit. The goofy picture is definitely frame-worthy. "The Bhatt family at their goofy best! This is a gem of a pic, taken at Sakshi & Mazahir's Cocktail reception! #mazakshi," the caption read.

Meanwhile, on the work front, Alia Bhatt has had a pretty busy schedule. She recently wrapped up the period drama Kalank which is set for April 29, 2019 release. Before that, the actress will be starring in Zoya Akhtar’s Gully Boy with Ranveer Singh. At the end of the year, during Christmas, Alia will be seen in Brahmastra with Ranbir Kapoor.

Emraan Hashmi, on the other hand, was recently seen in Why Cheat India. He is currently shooting for Netflix India original, The Bard Of Blood which is being produced by Shah Rukh Khan.