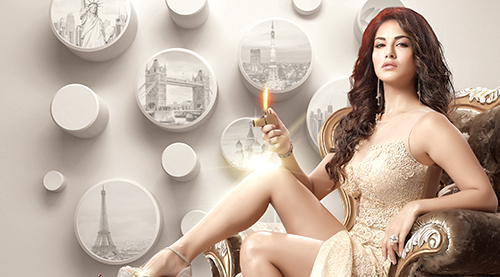 Sunny Leone is all fired up, and that is due to reasons more than one. On one hand, her latest release Ek Paheli Leela has managed to fetch attention of her target audiences, especially the ones at the single screen theaters, on the other, she hasn't seen similar courtesy been extended by quite a few critics. Though there are many who have appreciated the fact that she has come up with her most evolved performance till date in her fourth Bollywood release (after Jism 2, Jackpot, Ragini MMS 2) , many have wondered if there is anything in the film to really watch, beyond Sunny's body-beautiful on display.

Do you see that there is some kind of a baggage and a bias that is making certain people go completely berserk in their views about the film?
It is their inability to take the movie on the face value. If only they would have kept aside the name of an actor (referring to herself) and seen the film with a neutral attitude, perhaps their opinion wouldn't have been as scathing. It is unfortunate that they are sounding so biased. I can't see how it is so impossible for them to look at so many other things that the film has to offer. Ok, so you didn't like Sunny Leone, fair enough. How about sets, music, my other co-stars, twists in the tale - you didn't find anything worthwhile? Really? Because audience, which is paying for the ticket, is certainly seeing a different film then!

No wonder, from the glamour quotient perspective, you have certainly given a lot to your target audience to feel content with what they see on screen.
Well, the producer, director and we all decided collectively that we have to do something additional for our target audience. After all, their expectations are what that need to be catered to. Guess we have been successful in bringing something that is a feast for their eyes (laughs). I hope they have enjoyed all of that. However, more than all of that, I am hoping that they also enjoyed the story as well as acting.

From the look, costumes as well as overall mannerisms, you are bringing in various shades in your performance, right from period era to contemporary times. How did you work around this?
It was definitely not easy. We did a lot of workshops working on the character. It was challenging physically as well. I had to put on a lot of make-up and had to actually become Leela to gain her body language and the manner of talking. I loved every second of doing the film.

Many are wondering though if India was so liberal 300 years ago, what with the shortest of dresses and open relationships in display.
(Smiles) Now that's a liberty that the producer and the director took. Ek Paheli Leela is a very commercial film and what you see on screen is the manner in which they had envisioned it. I have no arguments on that. I was happy to comply with the requirements.

In fact the film has you traversing generations in a reincarnation drama. How did you work on that aspect with director Bobby Khan?
We talked a lot about the character and worked on the dialogue a lot. I can't say that I am the best actor in the world, but then I am a good listener. I wanted to hear Bobby on what he wants. When I am on sets, I work the hardest to see what the director is conveying to me. I become exactly what the character demands.

Since you are forging good professional relationships with one and all, can one say that the industry has finally embraced you well and started treating you beyond the glamour quotient?
(Laughs) See, it is really a hard question. A larger segment of audience is the one that has to accept me. My fans are really supportive, as they have been with me from Day One. I hope that critics out there who are giving their opinion also see my acting, dancing and expressions. If nothing else, I am sure they are certainly seeing that I have grown as an actor.