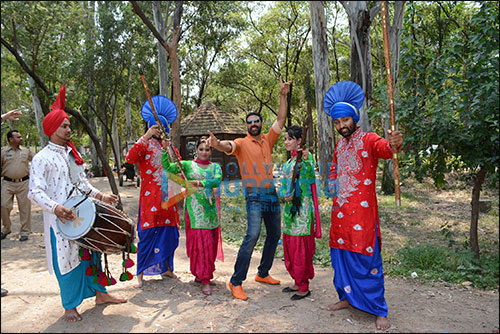 While he is gearing up for his upcoming film Gabbar Is Back, Akshay Kumar is also simultaneously shooting for Singh Is Bliing. Despite a busy schedule, the superstar decided to follow a traditional route when it came to welcoming the start of the spring season.

The beginning of the spring year, which is termed as Baisakhi, is a popular festival in Punjab and Akshay Kumar, along with friend and producer of Gabbar Is Back Shabina Khan, visited Chandigarh to mark the occasion. He not only celebrated it with locals but even decided to dance to the beats of the famous 'dhol', that too in a true 'bhangra' style.

On the other hand, Akshay Kumar also shared a picture of him sporting a turban (representing a 'Sardar') as we walked through the field with a camel and also tweeted his best wishes to all his fans. He wrote, "Running through the lush golden fields of Punjab...best feeling ever! Wishing you all a very Happy Baisakhi."

Tags : Akshay Kumar, Baisakhi, Check out, Gabbar Is Back, Singh Is Bliing