Guess who has Thor's hammer - Mjolnir. Actress Cate Blanchett, who played the role of Hela in Taika Waititi's Thor: Ragnarok, revealed that she has Thor’s legendary hammer. During her online appearance on Tuesday’s The Late Show With Stephen Colbert, she spoke what is the legendary thing she owns. 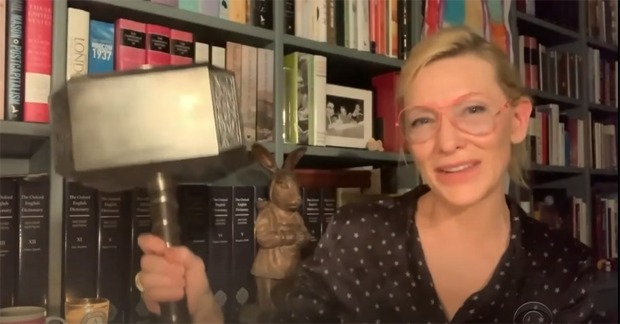 “You know how that Thor film that was shut down in Australia? It wasn’t anything to do with COVID-19. It was because I got the hammer. I have Mjölnir here. And, look at how easy I can lift it,” she said.

She further revealed she also has certain things from the film, The Hobbit. “I was looking for my ears—for my elf ears and I couldn’t find them. And I know the kids have Hobbit feet somewhere and I thought, Oh, I’d love to show them to you. Couldn’t find them. But I did find Tauriel’s fighting blades…I mean, some people stock toilet paper, but I’ve got these,” she said.