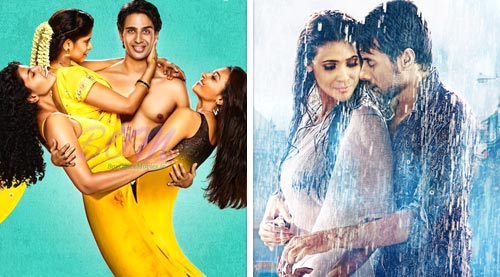 Both the releases this Friday Hunterrr and Dillwali Zaalim Girlfriend can be called naughty at the least, and raunchy at the most. Understandably, both the films were sternly asked by the censor board to clean out their acts before being granted a certificate.

In both films, the protagonist is played by a talented young wannabe-star. Gulshan Devaiah, who played Deepika Padukone's cousin brother in Goliyon Ki Rasleela Ram Leela, had impressed the director Sanjay Bhansali so much that he had increased his role as the film went along.

In Hunterrr, Gulshan plays a sex addict, who just can't keep it down, his enthusiasm we mean. Incidentally, Bhansali's Ram Leela also had a sex addict, thought not played by Devaiah but TV actor Sharad Kelkar who just couldn't keep his hands off Richa Chaddha.

Debutant director Harshvardhan Kulkarni had earlier written the sensitive Hasee Toh Phasee. Whether he can sublimate the repulsion and generate empathy for a guy who has only sex on his mind depends entirely on Kulkarni's skills as a storyteller and Gulshan's performance.

Distributors expect a decent opening for Hunterrr, since sex sells.

The week's other release Dilliwali Zaalim Girlfriend looks neither sexy enough nor inviting in any way to attract any sizeable crowd.

Like this week's other release, this too is directed by a new director Japinder Kaur. The film stars Divyendu Sharma, still struggling to find his bearing beyond Pyaar Ka Punchnaama, with two leading ladies, the very talented Lillette Dubey's daughter Ira Dubey and Prachi Mishra. Pradyuman Sharma who played Osama in Tere Bin Laden is also a part of the cast.

They are all talented actors in both releases this week. And there is suggested sex in the promos. But there is also NH10 from the earlier week which is growing in popularity. Experts feel audiences would rather watch Anushka Sharma blow the screen apart, specially now when her bratty cricketer boyfriend Virat Kohli has tweeted about "outstanding work" by "my love" .

Says trade expert Atul Mohan, "Both the films are being released in limited theatres. Their performance depends on the word of mouth, and how long they are able to sustain the heat of the the World Cup which is at its peak now."