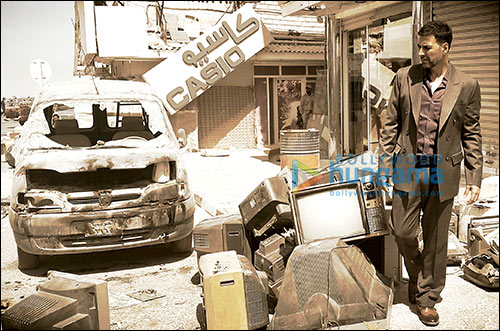 With Airlift being the latest movie Akshay Kumar is busy shooting for, the film has been already receiving a lot of attention, partly also due to the real life significance that it holds. This Nikhil Advani production where Akshay plays the role of a Kuwait based business tycoon Ranjit Katyal has gone on floors recently.

Here we give you a glimpse of the action star shooting for the edge-of -the-seat entertaining thriller. The story is set in 1990 at the time of the famous Gulf War when Saddam Hussein invaded Kuwait. Ranjit Katyal aka Akshay Kumar who considers himself a Kuwaiti rather an Indian, decides to help Indians who are stranded in Kuwait and strategizes the world's biggest evacuation, thus saving the lives of 1,70,000 Indians from Kuwait and bringing them back safely to India. To shoot the film, the director Raja Menon had to recreate Kuwait and Baghdad of that time. In this picture, Akshay Kumar is seen shooting in an old street of Ras-Al-Khaimah, which looks just like Kuwait in 1990.