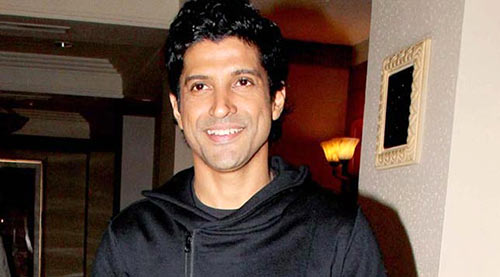 Farhan Akhtar shares his birthday on January 9 with his cousin the choreographer and self-styled filmmaker Farah Khan. Except that they have similar-sounding first names and have skipped hopped and jumped into direction from another vocation, I don't know of any two people in the Hindi film industry who are more dissimilar than these two.


Forget the disparity in their personalities; I am talking about their work. One makes Dil Chahta Hai and Don. The other thinks Happy New Year is the acme of entertainment.


I've known Farhan Akhtar from the time he made Dil Chahta Hai. This was in 2001. I had known his father Javed Akhtar from before that. I expected to meet someone lurking in the shadows of his father's greatness. But Farhan is not the least intimidated by his illustrious father's reputation. Come to think of it, he is not awed by anyone. But he has respect for every kind of human being.


Farhan is kind considerate thoughtful soft-spoken and one of the most sorted and sought-after people I know in this entertainment industry where people change overnight. I call it the Mallika Sherawat syndrome. She changed overnight the day Murder was released. Farhan hasn't changed one bit over the years, at least not for me. I can't recall one incident where we have altercated, or even argued over something I've written, except once when I reviewed Don and referred to it as an "arrogant" film.


"That was an arrogant observation," he retorted. And we both fell off laughing.


I know of no other director who has turned into a screen heart-throb so fluently. Of course Guru Dutt was a director turned actor. But never a matinee idol. Farhan's acting career took off spectacularly in Rock On. The film also launched Farhan's career as a singer.


Immediately after the release of Rock On Farhan's proud stepmother Shabana Azmi dad compared Farhan's performance to Balraj Sahni in Rock On. It took me a long time to figure out what she meant. Like the great Balraj Sahani Farhan doesn't seem to act. He is just there on screen for the same reason that Edmund Hillary went up the Everest. Because it's there.


Farhan's new release Wazir shows the actor at the peak of his power. He plays a man so obsessed with his grief that he would rather not come out of it. This is just the opposite of the real Farhan who would never allow pain to conquer his positivity. When recently the Rock On director Abhishek Kapoor took Farhan to court, Farhan refused to say a word against the backstabbing "friend".


Farhan values relationships above professional allegiances. His best friend Ritesh Sidhwani is also his business partner. They've been friends for more than 15 years. But Farhan keeps his distance from all his friends, even Ritesh. It's not that he doesn't drop his guards. His wicked sense of humour is never far from the surface .At the drop of a note he launches into a chuckle-filled fiesta of funny comments.


Farhan's world revolves around his wife Adhuna and his two daughters Shakya and Akira, his mom, the script writer Honey Irani and his sister Zoya. With his dad Farhan is at the crest of creativity. He has inherited a lot of his dad's looks and poetic sensibility. But Farhan is not moulded from the same clay as his father. Farhan would never set up another home no matter what the reason for it.


At heart Farhan is a family man born to wander free and wild in the forests of creativity. With Farhan you never what he would do next. Director, Actor, Singer, Writer, Poet, Activist, TV Anchor and Awards Host...all boxes ticked off in the resume. What now, Farhan?