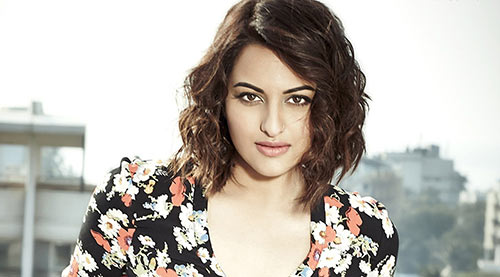 Over the weekend gone by, '1 Year of Tevar' was trending on social media. This was also the time back in 2015 when Sonakshi Sinha was grooving to the tune of semi-classical 'Radha'. She showed her 'desi' moves back then and impressed quite a few with her dance moves.

Circa 2016 and she is pretty much turning over the game upside down. For starters, she has gone all bohemian and hippie for the music video of 'Ishqholic'. No wonder, the Western route that she has taken has her switch over from 'Radha' mode to that of a 'Rapper'. This is not all as she has also debuted as a singer, hence showing a different facet of her personality.

Guess your song 'Aaj Mood Ishqholic Hai' has come at just the right time. While it presents you in a different look, it is also catching up as the next dance track for the youngsters, right?

I am really glad that it has been so well received. Even I didn't know what to expect as a response so when it came, it was fantastic. Today, everyone is saying that this is the new party anthem that played on during the New Year eve. That's fantastic. It has picked up really well. The best compliment for any artist is to see that your work has been received well by everyone. I can already hear it playing in the parties.

So how was the idea behind the song generated? Did you have in mind to get into the party groove or the composer/music company approach you with this plan?

This was something that I always wanted to do since I was a child. It was in the backburner for long and one fine day I decided that I had to just to do. When I sang at IIFA, it was the best feeling ever and then I wanted to do more of it. It was there in my mind for a very long time so I said to myself - 'Enough is enough, it is now or never'. I went to T-Series and told Bhushanji (Kumar) about this idea that I had. He was so encouraging and more than receptive. He said that it was amazing and wanted me to go for it.

In fact the song has you get into a rap avtar as well, other than conventional singing. That must have required some good effort behind the mike, isn't it?

(Smiles) That actually required the least effort because I love to rap. From my childhood, I have listened to a lot of rap artists, Eminem being one. He is the fastest rapper out there and I have been memorizing his songs ever since I can remember. Rapping is one genre that I have always enjoyed so it came to me easier than the singing part.

You must have been aware that all eyes would be on you when you step into a singing avtar. Did that make you really conscious or did you allow your bindaas nature and attitude to take over?

I have always been a bindaas and carefree person. For me, it is more about doing things for myself than please others. I have been true to myself. Maine kabhi nahin kaha ki main ek badi behatareen singer ban gayin hoon. I can't see myself coming behind the mike and singing a classical song. My voice is capable of singing the kind of genre that 'Ishqholic' requires. I am not here to try and convince people about anything else; I am here to entertain them. I am singing because I am passionate about it. So yeah, all eyes were on me but then people were not expecting much. This is the reason why they were pleasantly surprised when the song came out. In a way it is good because when expectations are not high, you can surprise people with what you are capable of.