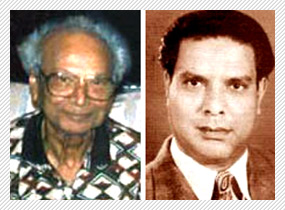 They are the best-known teams of composer and lyricist, and their contribution to music in a film is stupendous. The films will click or tumble, may be junked over the years or treasured, but the soundtracks they created live on. In this series, we look at six great teams from the '40s till today and explore their work, bonding and approaches. We start the series with the oldest famous team - Naushad and Shakeel Badayuni.

Naushad
Born December 25, 1919 in Lucknow to an orthodox court clerk's family, Naushad was attached to music from the beginning, and trained in music besides assisting vintage music directors Ustad Zhande Khan, Khemchand Prakash, Mushtaq Hussain and Manohar Kapoor. In 1939, with top lyricist D.N.Madhok's backing, he recorded his first song 'Bataa Do Mohe Kaun Gali Gaye Shyam' for Kanchan. His first release, however, was Premnagar (1940), a big hit. The 1944 RattanÂ¸ also produced by Madhok, slalomed Naushad into the top league, charging a hefty Rs. 25,000 per film. His last film was Taj Mahal - A Legend Of Love in 2005. Naushad passed away in 2006. With the Dadasaheb Phalke award and the Padma Bhushan leading his huge list of honours, Naushad remains Hindi cinema's most revered classicist, with a mere 70 films and some television serials in a career of 66 years - also the longest among any Hindi film composer.

Shakeel Badayuni
Shakeel Badayuni was born on August 3, 1916 to a Muslim scholar in Badayun in Uttar Pradesh. His father arranged for Arabic, Persian, Urdu and Hindi tuitions at home itself, and Shakeel was also very fond of reading. An early influence was a relative who wrote Islamic religious verse. During college, Shakeel began participating in mushairas, in one of which Naushad and filmmaker A.R.Kardar heard the 30-year-old writer and asked him if he wished to write in films. Shakeel happily accepted.

Shakeel's first song 'Afsana Likh Rahoon' was recorded for Dard (1947), and along with the classic 'Suhani Raat Dhal Chuki' from his second release Dulari, also with Naushad, Shakeel took off and remained a front-liner till his death from tuberculosis in 1970 at the age of 53. He had about 80 films to his credit, of which about a third were with Naushad.

The High Points
Shakeel Badayuni and Naushad collaborated in over 25 films till Sunghursh (1970), for which he wrote some lyrics from his bed. Among their films together are Aan, the first film soundtrack to use a 100-piece orchestra, Mother India, India's first Oscar nominee that remains one of cinema's greatest blockbusters, India's grandest love epic Mughal-E-Azam and Dilip Kumar's home production Ganga Jumna, which also was responsible for the evolution of the Bhojpuri film industry with the success of its songs and the lingo.

Other triumphs were the love epic Mere Mehboob and many other musicals like Mela, Jadoo, Dastan, Amar, Deedar, Dillagi and Uran Khatola in the '40s and '50s and Leader, Dil Diya Dard Liya, Kohinoor, Ram Aur Shyam, Palki and Aadmi in the 'Sixties.

The Special Bond
It's a record, pun intended, in those days of the black gramophone discs - ever since he found Shakeel, Naushad never worked with any other songwriter till the poet-lyricist's death, with the exception of the 1966 Saaz Aur Awaaz with lyrics by his pre-Shakeel associate Khumar Barabankhvi.

Naushad was a very religious man, and when his joint discovery with filmmaker A.R.Kardar, Majrooh Sultanpuri, became a Leftist, the composer moved away from the writer as communists were generally said to be agnostics. In sheer contrast, Shakeel was a man with a religious and positive bent in his work and had been taught by his father to respect all religions and also study them, which fitted with Naushad's inherent and Sufi-influenced credo of true secularism.

Little wonder then, that between them they turned out some of the finest Hindu songs in the Hindu ethos, especially along with another Muslim, Mohammed Rafi: 'Madhuban Mein Radhika' (Kohinoor), 'Insaf Ka Mandir Hai Yeh' (Amar) and 'Mohe Panghat Pe' (Mughal-E-Azam). It is widely known that director Vijay Bhatt was reluctant to have Shakeel write the essentially Hindu (and language-wise, Hindi-rich rather than Urdu-laden) subject of Baiju Bawra till he listened to what the poet had written.

Shakeel's versatility has been known even in his non-Naushad work (which includes films as diverse as Phool Aur Patthar, Chaudhvin Ka Chand, Sahib Biwi Aur Gulam, Gharana and Bees Saal Baad) but where the duo hit it off was in their deep knowledge of India's heritage of folk as well as their uncompromising attitude towards aesthetics.

Naushad preferred that the lyrics were written before the tune in most cases, but the master writer was also fine with writing to a tune, when such was the case. An important part of their bonding came from the fact that they were very close friends and it was Naushad who got Shakeel a house very near his bungalow.

Their dedication was exemplary - and the song 'Pyar Kiya To Darna Kya' from Mughal-E-Azam was almost ready but for its last segment that was not working out. Without the slightest awareness of time and mundane matters like hunger and thirst, the duo worked on just one stanza from sunset through the night and it was with the first rays of sunlight the next morning that the perfect lines, 'Parda nahin jab koi khuda se bande se parda karna kya' were locked, lyrically and musically!

In today's prolific times, a music director-lyricist team would take a mere five years to touch a joint score of 25, but where would the range and excellence come in that lent most of their songs a brilliant timelessness?

In the next article in the series, we will analyze what many consider to be Hindi cinema's greatest quartet ever - composers Shankar-Jaikishan and lyricists Hasrat Jaipuri and Shailendra.