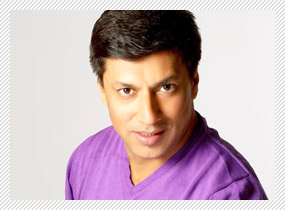 Madhur Bhandarkar is hours away from realising his dream. Carrying Heroine in his heart for years, he has now managed to bring the story to the big screen. The

enthusiasm is pretty much intact, the energy that he brings in every conversation is unmistakable and he is as animated about Heroine as he was for a Dil Toh

Baccha Hai Ji, Fashion or a Corporate. However, what is evident is the sheer quantum of promotion that he is indulging in along with his leading lady

Kareena Kapoor. As the two 'brands' associated with the films, they just seem to be all over. Over to Madhur.

You have always been known for promoting your films to the hilt. However Heroine seems to be exceptional.

Definitely yes. I believe in aggressive marketing and Heroine is no different. This has always been my mantra and I always feel that in today's world where there

are so many channels and media forums, it is absolutely necessary to register your product in the consumer market. This is something that my actors too realize. For

Dil Toh Baccha Hai Ji, Ajay (Devgn) as well as Emraan (Hashmi) went all out to promote it. Now I am happy to see Kareena too supporting our film's campaign

Apparently she didn't pick up any other film in the interim period for a reason...

That's true, she gave her dates exclusively for Heroine and entirely concentrated on just this film. For full eight months she didn't do any other movie and was

totally focused on Heroine. We shot for 72 days and in the days and weeks gone by, we have become good friends too. We are candid about so many things and

when that happens, the performance shows on screen.

Since this was a performance oriented film for her, the two of you must have extensively prepared before stepping into the sets, isn't it?

Naah, not at all. In fact neither Kareena nor I believe in workshops. (Laughs) None of us is fond of discussing one scene for four-five hours. What's the point in that? I am

quite impromptu about scenes, behaviours and patterns that come with them. I like my actors too to be very instinctive on sets and go with the flow of the script. Kareena

too loves that style and was actually happy to see me so relaxed. After all, she thought that I would be a serious director but on the second day itself she understood how I

operate. My funda is simple; filmmaking is something that should be enjoyed instead of taken over your head.

While you and Kareena were obviously enjoying the entire process, how about your male leads Arjun Rampal and Randeep Hooda?

Arjun is the surprise package in the film and he has played the role of a superstar quite effortlessly. On the other hand Randeep is superb as this broody and aggressive

cricketer who is completely in awe of the character played by Kareena. Not to mention Divya Dutta who is just amazing as this PR person. Also watch out for Ranvir

Shorey, he would throw in a surprise too.

General consensus though is that there won't be a surprise when at least one National Award comes the film's way. After all your films have more often than not

fetched awards for the leading actresses at least.

You know, I have been answering this question practically a dozen odd times a day (smiles). See, it is very difficult to custom make a film in such a way that it can fetch

awards. As a director first and foremost, I have to believe in the story that I want to tell. Everything else comes after that.

Well, moolah will start flowing in much earlier. Any numbers you have set for yourself?
The film has been made on a moderate budget and a lot of revenue has already been generated from branding, satellite etc. USP of my films is that I make them on a

controlled budget and hence recovery is never a challenge. Now it has to be seen how far Heroine goes at the box office. As for the awards and rewards then well,

they are the perks which come at a later stage (smiles).