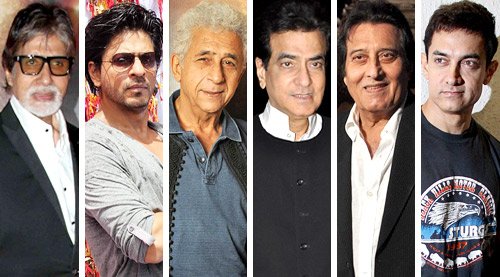 1.  Amitabh Bachchan-Rani Mukerji in Black: From teaching his deaf-and-mute student how to talk to, how to kiss, this teacher sure knew how to bring out the best in his differently-abled pupil. 9 Years after it was released, Sanjay Leela Bhansali's Black remains the most passionate and audacious portrait of the guru-shishya relationship . Passionate, tumultuous and life-defining Rani bonded with the Big B as though tied to him by an umbilical chord.

2.  Shah Rukh Khan-Uday-Jimmy-Jugal in Mohabbatein: The saga of the guru-cool... The school in this Aditya Chopra film with its 7-star classrooms and compelling cleavages aggravating the ambience of subverted academia, seemed to belong to another planet. Shah Rukh Khan was the romantic violinist teaching his students Uday Chopra, Jimmy Sheirgill and Jugal Hansraj a thing or two about love. It was a wildly improbable romp into the realm of the untenable given strength and conviction by the confrontational rhetorics between Big B and Shah Rukh representing the conservative and liberal aspects of education.

3.  Naseeruddin Shah-Pooja Bhatt in Sir: Mahesh Bhatt's powerful portrait of the underworld's obsession with attaining social respectability through the academic route. An upright teacher Naseruddin Shah takes on the job of helping a gangster's daughter with a speech impediment. In this film Naseeruddin Shah came closest to replicating the warm and empathy of Sidney Pottier in To Sir With Love.

4.  Simi Garewal- Rishi Kapoor in Mera Naam Joker: Raj Kapoor captured the intellectual and sexual awakening of the pubescent Rishi Kapoor with enormous sensitivity. Simi as the Catholic m'aam in the short dresses kindled non-academic thoughts in many of us who have had schoolboy crushes.

5.  Jeetendra-Jaya Bhaduri in Parichay: Falling in love with your in-house tutor would today amount to a cognizable offence. Back then in 1972, Jeetendra, looking more like director Gulzar Saab than the Casanova from Farz gets to teach kids from age 6 (master Rajoo) to 19 (Jaya) and finally gets to take the oldest pupil home as guru-dakshina. In the original story The Sound Of Music, the teacher was female and she fell in love with the kids' father played by Christopher Plummer.

6.  Vinod Khanna-Bindu in Imtihaan: Long before sexual harassment came into the common legal lexicon of the gender dynamics, the voluptuous Bindu jumped all over her professor Vinod Khanna. When he rebuffed her passes she accused him of sexual harassment. This was college straight out hell with Khanna determined to straighten out the delinquents.

7.  Naseeruddin Shah-Shreyas Talpade in Iqbal: The student-teacher relationship need not be restricted to the classroom or to the textbooks. In Nagesh Kukunoor's film it spilled over into the cricket field where the inebriated coach Naseer trains a deaf-and-mute boy. Great chemistry between the coach and the coached.


8.  Shah Rukh Khan-Sushmita Sen in Main Hoon Na: The one bright spot in this film was Sushmita as the chiffon clad teacher being stalked by 'student' Shah Rukh Khan. The premise was bizarre, to say the least. But Khan and Sen sizzled in their song together. Yes, the student gets his wish-lust with his teacher.

9.  Aamir Khan-Darsheel Safary in Taare Zameen Par: When the dyslexic Ishaan (Darsheel) meets his new art teacher Ram Shankar Nikumbh (Aamir) the educational system gets a jolt. Nothing that Aamir does can ever be routine.

10.  Sunil Thapa-Priyanka Chopra in Mary Kom: He is the boxing coach and he wants 5 reasons from his wannabe pupil why he must teach her boxing. 'Because I love boxing, boxing, boxing, and boxing...Do I have to give you the fifth reason as well?' Priyanka retorts. The guru-shishya relationship grows from love to the glove.