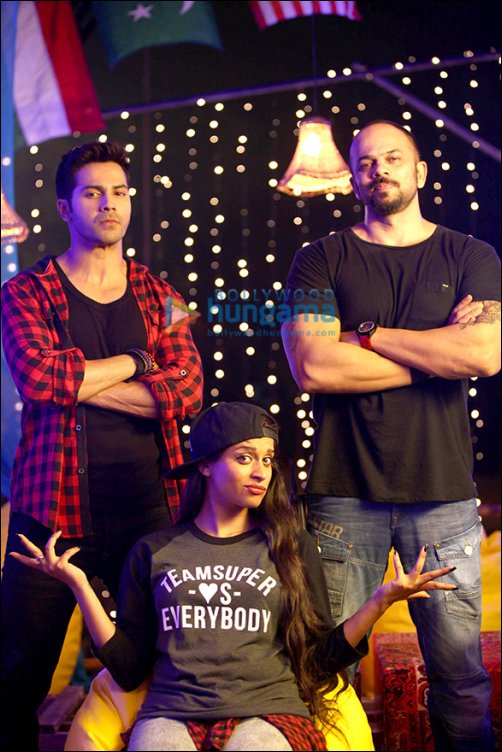 All eyes are on Rohit Shetty's upcoming film Dilwale which has created curiousity since the day it was announced. While there are many reasons for the film to be constantly under the limelight, one of the major reasons is the chemistry of Shah Rukh Khan and Kajol. On the other hand, Rohit Shetty who is working with the superstar after Chennai Express is equally excited about this action comedy and has already got the film rolling.

Earlier we had given a glimpse of the on the sets fun of Dilwale, where we spotted a few members from the star cast along with their director Rohit Shetty posing for the shutterbugs. And now, it is the arrival of a new guest that has made the moment special on the sets of the film. Superwoman aka Lilly Singh, a popular Indo-Canadian Youtube comedian and celebrity decided to drop in on the sets of Dilwale and we spotted the rugged boys, Varun and Rohit posing with the star. Known for her quirky antics, we spotted Lilly Singh who was seen in her elements whilst posing with the duo.

Happy about getting opportunity to bond with Varun Dhawan, Lilly revealed that they bonded over their love for the popular WWE wrestler 'The Rock' (Dwayne Johnsson). Though disappointed with the fact that she couldn't meet Shah Rukh Khan, she was happy about her meeting with Rohit Shetty and was all praises for his kind of humour.