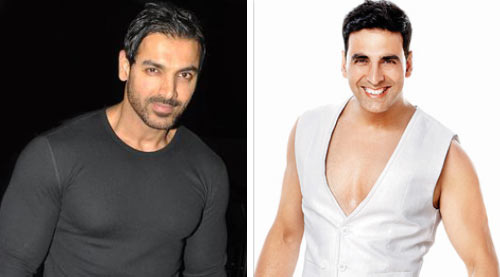 Gandhi Jayanti this year promises to be quite a sanguinary affair. Two biggies, neither too Gandhian in spirit, are lined up for release over the long weekend on October 2.

Nishikant Kamat's Rocky Handsome is a comeback vehicle for John Abraham who has been missing from the screen for nearly two years.

Rocky Handsome is an action comedy adventure packed with the kind of dare-devilish stunts never seen before in our films. Director Kamat and Abraham had earlier come together for the very successful revenge drama Force.

Akshay Kumar's October 2 release Singh Is Bling is very special, as it brings him back together with director Prabhu Dheva. The twosome scored a resounding hit in Rowdy Rathod two years ago.

Both the biggies lined up for Gandhi Jayanti, mark the return of a tried and tested actor-director pair. It is unlikely that the box-office can absorb two such gigantic projects on the same Friday.

In 2014, two biggies the Hrithik Roshan-Katrina action-adventure Bang Bang and the Priyanka Chopra bio-pic Mary Kom were scheduled for October 2. Finally, Mary Kom bowed out. And instead, Bang Bang had Vishal Bhardwaj's Haider for company on October 2 last year.

It remains to be seen which among the two purported blockbusters scheduled for this year's Gandhi Jayanti bows out first.