After completing October, Varun Dhawan got back in work mode. Even Anushka Sharma has already begun shooting for the next film with Varun titled Sui Dhaaga- Made in India. The duo has undergone a complete makeover to get into the skin of their characters.

On Monday, Varun Dhawan and Anushka Sharma met with a couple of local weavers to buy chanderi sarees. Promoting make in India and the Indian handloom, Anushka captioned the image, "Spent my day off buying lots and lots of Chanderi Sarees directly from the weavers who spend tireless amounts of time and energy making one beautiful saree. Sometimes it even takes one whole month to make just one ! Huge respect to their art & craft @varundvn#MakeInIndia #IndianHandlooms#Handloom #Chanderi." 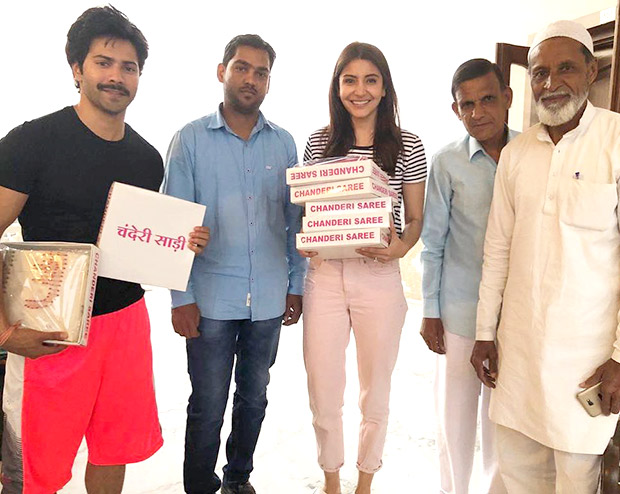 Varun Dhawan also shared the same image and captioned it, "#chanderisarees are as beautiful as the people of Chanderi #madeinindia. It sometimes takes almost a month to make one. Since @anushkasharma bought some she asked me to take a look and I also ended up buying few and in the process learnt so much about our #indianhandlooms #respect #art #suidhaaga."

Directed by Sharat Katariya, Varun Dhawan essays the role of a tailor and Anushka Sharma is playing the role of an embroiderer. Varun and Anushka have been paired for the first time and are definitely the most-awaited on-screen jodis of 2018. Yash Raj Films’ entertainer Sui Dhaaga – Made in India is set to release on September 28 this year, right before Gandhi Jayanti.