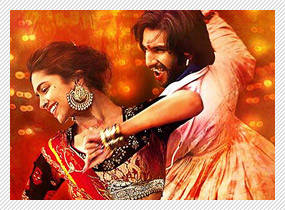 Just when you think you have seen it all, there comes a film that reminds you of

how far the cinematic medium has come....And how far it can go in the right hands. And let's

face it. Bhansali is Bhansali. His visual imagery in all his earlier films from Khamoshi: The

You could say Bhansali's cinema is the visual equivalent of Lata Mangeshkar's singing. And you

and tenor of Bhansali's Devdas. That too was a steeply sensuous cinematic adaptation from

a literary source. Ram Leela goes to Shakespeare's Romeo & Juliet and comes away

with a marvel of a tale of love-at-first-sight. Bhansali tilts his hat to mythology, folklore

naturally to only this filmmaker, and no one else.

debut. What he does to Shakespeare's tumultuous saga of sudden love between scions of two

warring families is beyond the imagination of all other living filmmakers of this country. The

rigorous reworking of the Shakespearean classic required a certain sense of recklessness.

But Bhansali is Bhansali...Every image, every frame tells a story. Every shot in this brilliant

film has a place in his cosmos. You won't be left wondering for even a split second why you saw

what you just did.

It's all a part of a grand design. And yet so overflowing with an unrehearsed warmth and

vivacity, so brimming with spontaneous joie de vivre, and celebration, you wonder if

give to us characters who are many many sizes larger than life.

Yup, size matters. And in the case of Ram Leela you can say that with a

wink. Bhansali's Romeo and Juliet are unabashedly sexual in the body and verbal language. None

family of gun-wielding criminals helmed by a steely matriarch (Supriya Pathak, brilliant). He

comments on her '136 inch' chest, she talks about his, er, trigger. They are in love and they

know lust is an integral component of their relationship.

Gosh, these two are Romeo and Juliet on steroids! And this is as good a place as any to tell you

and Deepika have done. They don't play the two characters. The couple owns their characters.

From the moment he spots her at a Holi bash, unholy thoughts begin to cross randy Ram's mind.

As for Deepika Padukone...if Shakespeare was alive (and in many ways this film does bring him

back to life) he would have penned a full-blooded sonnet on Deepika's beauty and grace. When she

expresses anger she is molten lava and when she dances she is the epitome of feline grace. If

resistance, and one that impels a standing ovation for the actress and her director. Yup, she

can show this one to her grandchildren with pride of ownership.

So much has been said about Bhansali's visual sense. But not enough. The way he composes the

subject that textbooks can be written about. With a magician's dexterity Bhansali weaves the

uses the Sarod. It's an instrument to converse with divinity. Wasiq Khan's art work too unfurls

jostling or crowding the canvas.

Of the innumerable imperishable images that emerge from Ram Leela's

tumultuous tale of overnight passion, elopement, estrangement and reunion, I'd single out two.

attackers. As she runs through the rugged hinterland her brass vessel tumbles down-slope with

The sequence, caught in a desperately dying light, is probably the most vivid image of impending

The other unforgettable image features Deepika, her hand bloodied after an injury, lying on the

wet ground in a streak of blood. It reminded me of Aishwarya Rai's slashed wrist creating a pond

of blood with her hand in Bhansali's Hum...Dil De Chuke Sanan.

Fire and blood are never far away from Bhansali's vision. Though there are plenty of bloodied

images in Ram Leela, the fire this time rages in the eyes of the characters.

closet-painter. A closet-musician, Bhansali certainly is. His self-composed songs assisted my

The actors do the rest. Every performer surrenders to the tempestuous saga. While Supriya Pathak

Devaiah and Sharad Kelkar are the portrait of pitch-perfect emoting.

Really, you've never seen anything quite like this before. Exhilarating, tumultuous, passionate,

Juliet would have surely made Shakespeare giddy with joy. Brimming with exuberance and

to be an incomparable storyteller. As for the Ranveer-Deepika pair, I finally know what

Are they really in love? Who cares! Their on-screen collaboration would far out-distance

anything that they would share together or apart in real life.

Goliyon Ki Raasleela Ram Leela (phew!) is the most vital romantic musical in the last

five years. To experience it is to serenade the divine. To miss it would be a crime.