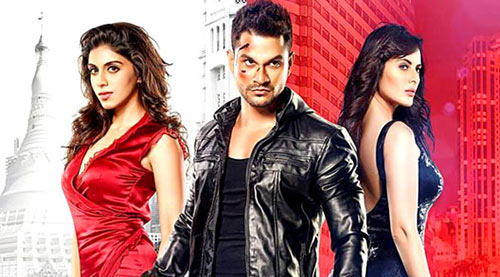 What could have been an interesting plot about possibilities in a given crisis turns instantly into an unintended comedy when director Vikram Bhatt shows up in Kunal Khemu's hotel room in Bangkok as a, don't laugh yet, genie!>

Mercifully the genie is out of the bottle. But someone certainly took a swig or two from that bottle before writing this doped-out homage to unscheduled hilarity.

Not that Bhaag Johnny was ever meant to be a dud. It must have sounded promising on paper, a crime thriller with a twist to the telling.

What if we see the same crime from two different points of view?

The film opens with two almost back-to-back party songs where Kunal Khemu tells us he is the best thing God has created since Honey Singh. Quickly then, he is in his sexy boss's office. And clearly the boss, fortunately a woman, has more on her mind than work. Grabbing Khemu by his balls (in a manner of speaking) she accuses him of inside trading and blackmails him into committing a murder.

By the time Kunal's character can figure out who's who and what's what, we are compelled to think about a murderous thought of our own.

There are two sides to every story. Unfortunately, we get to see only one perspective in the movies. And that's a blessing. It spares us the collisions and confusions of a dual-perspective that we are privileged to witness in Bhaag Johnny. Writer Vikram Bhatt's ongoing fascination with the supernatural is here extended into an onscreen cameo appearance where he offers Kunal's cornered protagonist a way out of his crisis.

Alas, the only way out for the audience is the theatre exit. Rush for it while you still have time. If you actually sit through this muddled thriller you'll see Kunal Khemu (a fine actor, who deserves much better) woo Zoa Morani at a posh restaurant through an invisible glass wall.

It is one of the film's better written and enacted sequences. From there onwards it's downhill all the way to the bland finale, with Khemu alternately revving down Bangkok and Pattaya's streets with Zoa Morani and Mandana Karimi in two different sections of the plot fused together to confuse and confound audiences into the false belief that experimental plots are to be lauded even when they careen towards the contemptibly corny.

The supporting cast wastes the talented Mukul Dev as a grumpy cop whose gun has seen better days.

Kunal Khemu tries hard to infuse credibility into a plot and character which seems hell-bent on self-destruction. But what can he do when his character must voice vain inanities like, "Main waisa aadmi nahin hoon.Main uss-se bhi oopar aadmi hoon." Or some such balderdash.

Beyond a point I ceased to listen to anything except the screeching of expensive wheels in this 'tyre'ing thriller with no redeeming qualities except Kunal Khemu.

He deserves better. So do we.

After 1920 and Raaz, Vikram Bhatt announces…

“The support I’ve received from my…

Kunal Kemmu has his mind set on this role by…

Kunal Kemmu TALKS about his film with…