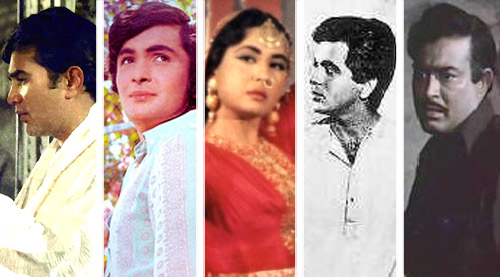 this time they did not have a single moment of shared physical intimacy. Khanna plays a lonely man whose wife has no time for him. Sharmila plays a prostitute who offers him drinks, a shoulder and

solace. The songs written by Anand Bakshi and composed by R D Burman went a long way in making the relationship look pristine yet passionate. Is it possible for two such intense human beings to be

so much in love that they never need to make love? Watch the two actors in this film. They define celluloid romance.

2. Bobby: Every generation has its love-defining film. Mine was Raj Kapoor's Bobby. With a dew-drop fresh pair Dimple Kapadia and Rishi Kapoor, so much in love and such

innocence (they apparently didn't even know about sex!) that it would seem laughable today. But that was the 1970s when Raj Kapoor wove a mystical magic around his modern day tale of a naive Romeo

and a saucy Juliet. By the time they eloped, we were out of our seats cheering for that thing called love.

3. Pakeezah: "Chalte chalte yuhi koi mila gaya ttha" A man Raj Kumar from an aristocratic family gives away his heart to a fallen woman, a tawaif, after seeing her

...feet! "Aapke paon bahot haseen hain inhe zameen pe mat rakhiyega," he writes and tucks the note between her altaa-painted toes. For a large part of the film Meena Kumari lives with

4. Devdas: From the Bimal Roy and the Sanjay Leela Bhansali versions of Saratchandra's timeless tale of doomed love, I pick the latter. Bhansali's was a giddy opera of opulence,

songs dances and heightened drama helmed by the star-crossed images of 'Devdas' Shah Rukh drinking himself to death for the love of 'Paro' Aishwarya Rai. Then there was Madhuri Dixit as Paro pining

in unrequited love for a man who loved only himself and them maybe Paro...The complexities of the characters were all painted in bright dazzling colours. This was a flamboyant monumental ode to

5. Namkeen: Gulzar Saab shot all his films on location in a woman's heart. He has created innumerable heart stopping moments of love and longing. My favourite is Namkeen a

film about three derelict sisters on a lonely hill station who fall in love with their tenant, a truck driver played by Sanjeev Kumar. The women Sharmila Tagore, Shabana Azmi and Kiran Vairale and

their mother Waheeda Rehman made a dazzling gallery of unforgettable women all looking for ....love!

6. Anupama: Sharmila Tagore spoke no more than 5 lines to the poet Dharmendra in Hrishikesh Mukherjee's film. Her eyes said it all. This is the story of a repressed unloved girl

finding comfort in the arms of a man who draws her out of her solitude. Stunning silences run through the theme of romantic yearning.

7. Sadma: Kamal Haasan plays the nurturer to child-woman Sridevi after she suffers mental regression in an accident. He oils and combs her hair, feeds her lunch, takes her out for

bicycle rides. If Sadma doesn't make you fall in love with love then nothing will. Balu Mahendra's film simply made us grateful for that emotion which has gone out of relationships:

8. Bandini: Love as a form of self-destructive emotion. Kalyani, played by the incandescent Nutan is so in love with the aging freedom fighter (Ashok Kumar) she abandons all her

social responsibilities, disgraces her family and self by running after him for better or worse. S D Burman's song 'O Re Manjhi Mere Saajan Hain Uss Paar' embodies Kalyani's unstoppable

self-destructive passion. What do you do with a woman so much in love? Director Bimal Roy seemed to ask in despair.

classic novel told us that love can exist even in the most forbidden place as long as the ego doesn't destroy it. This was epic love tale of a woman who dreamt and a man who dared.

through the romance creating tidal waves of emotion on which rode the mutual ardour of the lovers in this tempestuous love-tale. They don't build such dizzying romances on screen any more. Unless

it's a film by Sanjay Leela Bhansali.