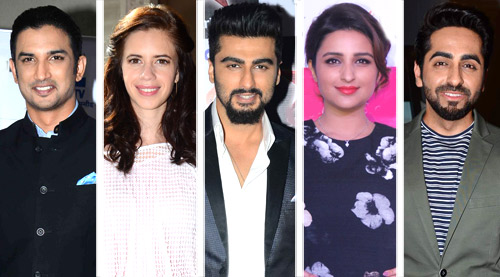 Sarah Jane Dias: "Mani Ratnam's Dil Se, and my favourite song 'Dil Se Re' by A R Rahman in the same film."

Ayushmann Khurrana: "My favourite romantic films are Dilwale Dulhaniya Le Jayenge and Kuch Kuch Hota Hai. Both because of the king of romance Shah Rukh Khan. My favourite

Aashiqui 2 songs. And I love my own songs for my beloved wife, though she prefers retro."

PS I Love You and The Notebook."

Tapsee Pannu: "To me Twilight with Kristen Stewart and Robert Pattinson is the ultimate love story. My favourite romantic song is 'When You Say Nothing At All' by Ronan

Rajkummar Rao: "My favourite romantic film is Falling In Love featuring Robert de Niro and Meryl Streep from Hollywood. In Hindi it is Dilwale Dulhaniya Le Jayenge. My

Pal' and 'Meethi Boliyan' from Kai Po Che. And my favourite international romantic songs are 'Mine Would Be You' by Blake Shelton and 'Highway Don't Care' by Tim