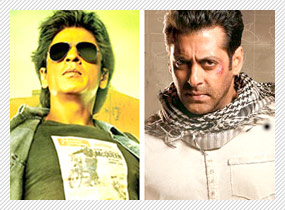 A famous philosopher once said that 'The only thing that's constant in life is CHANGE'. In simple words, life is a journey like cycleâ€¦ what goes up comes down and vice versa. The last few days have witnessed a 'Cyber World War', courtesy the gigantic response that SRK's latest release Chennai Express has met with.


The aforesaid 'Cyber World War' is happening between two parties viz., SRK fans and Salman Khan fans. While SRK's fans are going gaga, goo-goo and gee-gee over Chennai Express breaking all BO records (which also includes Salman's Ek Tha Tiger), seems like Salman Khan's fans are unable to digest this. All of this has resulted in verbal diarrhea between the two warring parties.


Bollywood Hungama wants to tell both the 'parties' to take the 'WAR' lightly and not to resort to any kind of unpleasant comparisons between Salman and SRK and their films' performances at the BO. We sincerely urge the two parties to hug and make up like Salman and SRK did at a recent party.


Lastly, what one feels is that, with the super success of Chennai Express, SRK may have won the battle, but the war is far from over for Salman Khan as he has multitudes of blockbuster films under his sleeves. So, friends, let us all pray that these two stars should break many records but not even a single heart!