Filmmaker Rohit Shetty is making yet another spectacle project with Akshay Kumar starrer Sooryavanshi. The actor is set to star as an ATS officer in the film. The shoot commenced in May, followed by action packed schedule in Bangkok. Now, they are in Hyderabad shooting major sequences. They even filmed the recreation of 'Tip Tip Barsa Paani' which has been choreographed by Farah Khan. 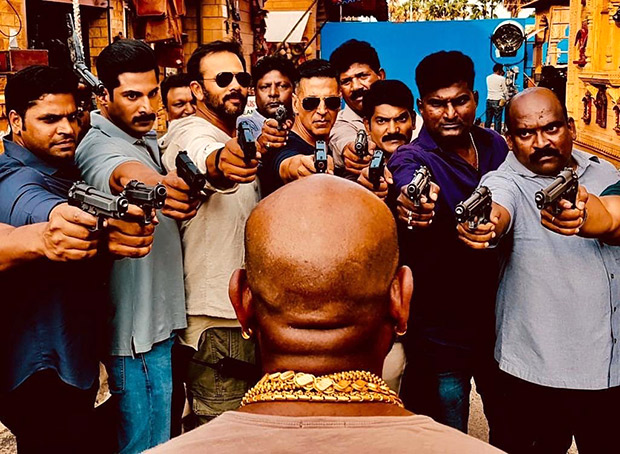 In a photo which was shared by Akshay Kumar on Friday, he jokingly said that they are ready to shoot their fight master since the action part is now completed. He also praised that their action director who worked hard this past month during the shoot of high octane sequences. He captioned the photo, "When your Action is over and the only thing left to do is Shoot the Fight Master #Sooryavanshi giving Love to The Big Man with the Golden Head who kept us all alive during this Epic Crazy month." In the photo, one can see Rohit Shetty, Vivan Bhatena among others.

Another photo from the sets has gone viral in which Akshay Kumar is seen having a conversation with his longtime buddy, Gulshan Grover. Gulshan is once again playing the bad man in Sooryavanshi. He shared the photo and wrote, "On the sets of #Sooryavanshi with my brother Akshay in Hyderabad."

On the sets of #Sooryavanshi with my brother Akshay in Hyderabad pic.twitter.com/tqF40Q862p

Lol..chor pakda gaya...#Schedulewrap for me. #Hyderabad #ramoji #sooryavanshi. Had the best time. This is the best unit I've ever worked with. So confident and composed about everything they do and ofcourse @itsrohitshetty practical jokes on set and @akshaykumar sense of humour just keeps you going even in 50deg heat. #blessed #actorslife #crazymadfun

ALSO READ: Sooryavanshi: This still from the sets of ‘Tip Tip Barsa Paani’ will make it harder for you to wait!