Akshay Kumar is gearing up for the release of Sooryavanshi where he will join the Rohit Shetty Cop Universe. A glimpse of his character was given in Ranveer Singh starrer Simmba. The actor has performed some high-octane action scenes for the same and the stills have left our jaws on the floor. Reuniting once again with Katrina Kaif on-screen, Akshay Kumar is super excited for the release. 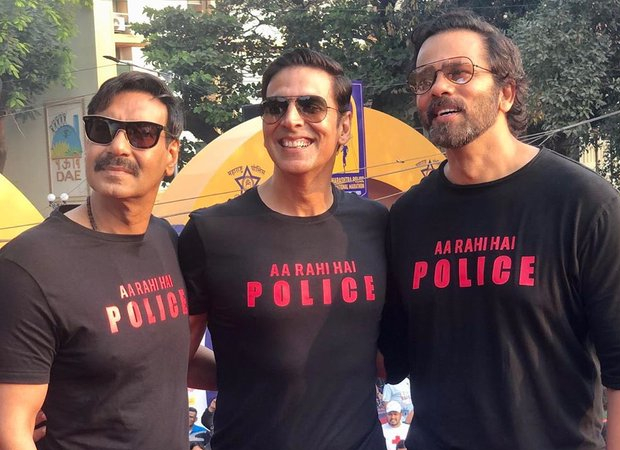 With Maharashtra Police Marathon being held today, Akshay Kumar, Ajay Devgn, and Rohit Shetty turned up at the event to cheer the runners. The trio was seen wearing a black t-shirt that had “Aa Rahi Hai Police” written on it. The fans are also waiting eagerly to see Akshay, Ajay, and Ranveer get together for a power-packed climax.

Dharma Productions’ Twitter handle posted the picture with the caption, “#Sunday = Funday defined by team #Sooryavanshi as they come together for the #Maharashtra Police International Marathon!☀”

#Sunday = Funday defined by team #Sooryavanshi as they come together for the #Maharashtra Police International Marathon!☀@akshaykumar @ajaydevgn #RohitShetty pic.twitter.com/w3TqUWYhor

Sooryavanshi is slated to release on March 27.

Also Read: Akshay Kumar’s daughter, Nitara, walks on his footsteps as she heads for her martial arts exam after taking tips from her father