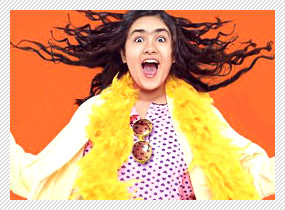 Debutant Director Sonam Nair was very clear about how she wanted all her young character to look in her coming of age flick Gippi. Mostly 14 year old teens studying in class nine, a distinct look was created for each by Nair and stylist Ayesha Dasgupta. 'The styling of all the characters is very script driven' is what the director has to say.


The main leads Taaha Shah, Riya Vij and Jayati Modi go to school, attend school parties and gradually become aware of their sexuality. "I was very clear regarding how each character especially Gippi (Riya), her classmate Shamira (Modi) and Arjun (Taaha) should look," says Nair. For Dasgupta, familiar with the glam and glitz world, Gippi was her first independent film involving characters who had to look natural. "Since the story is set in Shimla, their looks were kept a tad conservative compared to city bred youngsters," reveals the director about how Riya, Jayati and Taaha's looks were designed.

Taaha Shah as Arjun is the oldest amongst all the characters in the film. He's the 18-year-old guy who has failed a few times in high school and is also this quintessential bad guy. Ayesha and I decided to create a grungy look which displayed a couldn't-care-less attitude. So, It was leather jackets, torn jeans and crumpled, old looking tee-shirts and of course, a stubble. This attire gave Arjun a brooding quality which appealed to all the girls in Gippi. I also retained Taaha's naturally wavy and curly hair to give him that slightly untidy and out-of-the-bed look. It worked wonderfully.

Riya's character, Gippi was designed keeping in mind that she is a clumsy dresser. She's happy and comfortable wearing an ill-fitting uniform which accentuates rather than hide her plump body. Gippi who has no idea how to dress up for a function, cheerfully attends school parties with what her mother chooses for her - and that could be a frilly frock with polka dots and a colorful pin in her hair! At home it is always pyjamas for her. Another highlight of her look is her hair. In real life Riya has straight hair but I gave a premed look as girls with curly hair are a little crazy and that's what Gippi is. Minimal make-up used for everyone.

Jayati's character Shamira is a complete contrast to Riya's. She is this high school priestess and a 'hot and happening' girl. She is very fashion conscious and knows how to dress appropriately at every occasion. Even while designing her school uniform, I played around with the silhouette of her dress, giving her shorter hemlines and a more shapely cut to accentuate her perfect figure. So Shamira looks hot in her uniform too. Interestingly, Jayati's personal wardrobe included exclusive designer clothes and shoes which I decided to use to dress her in the film. She would bring all her stuff on the sets and Ayesha and I created some impressive designs for her, but we kept in mind that Shamira had to look hot and not provocative or over made-up. At school parties we dressed her in elegant and sophisticated clothes which looked good on her. As for her hairstyle, we retained her naturally straight and silky hair as that is how a fashion conscious girl would keep it.