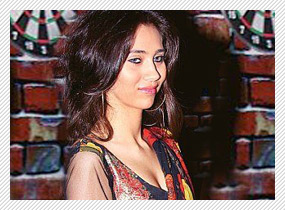 Sasheh Agha may be happy singing and gyrating to the tune of 'Barbaadiyaan' in her debut flick Aurangzeb. However, in real life her past is returning to haunt her in a big way. Her ex-lover Ruslaan Mumtaz, against whom she had apparently levied a few heavy duty charges, is now bringing his own comeback film on the same date as Aurangzeb. Not just that as the core theme of his film is uncanny similar to the real life trouble that had brewed between the couple when they were supposedly seeing each other.

"Ruslaan's film is called I Don't Luv U and it has an MMS scandal at the core of it. The film's plot is centered on a young couple whose MMS video is shot without their knowledge when they are in a compromising state. Now that is pretty much similar to the real life tale of Ruslaan and Sasheh. A MMS video had started floating that had Sasha kissing another guy. When she got to know about it, she accused Ruslaan of uploading the video, something that the youngster denied," informs a source.

While the upset mom and daughter promptly called for a press conference to clear the air by claiming that the clips featured someone else, Ruslaan broke off with Sasheh and went his own way. However, not many had even the briefest inkling of Ruslaan actually featuring in a film that had an uncannily similar theme and plot.

"While he consented to play a lead in the film, it is obvious that the story would be told from his point of view. As per Ruslaan, he wants to tell the world that how those who are in the video are more of victims than perpetuators of anything naughty or objectionable," the source adds.

What does appear to be pretty apparent (and naughty) is the fact that he chose to bring his film on the same day (17th May) when Sasha is all set for her big moment with Aurangzeb.

The makers of I Don't Luv U are maintaining an official stand that the film has nothing to do with the Ruslaan-Sasheh story. "It is instead based on the infamous 2004 MMS scandal that involved two school-going children from Delhi Public school, New Delhi", a source states.

Samantha Akkineni keeps it traditional in…

Avneet Kaur impresses with her effortlessly…