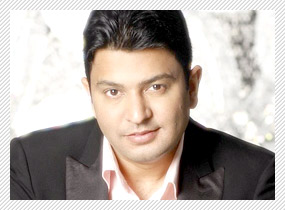 Bhushan Kumar is a happy man. He is taking the legacy of his father (Late Gulshan Kumar) forward with Aashiqui 2. With the film releasing today amidst great buzz and hype, Bhushan is elated with the fact that yet again, it is music which has done the trick. 'Tum Hi Ho' has turned out to be the voice of the nation in the current season while 'Sun Raha Hai' has managed to catchy fancy amongst the audience as well.

"And the best part is that we didn't have to hear 100 songs before picking and choosing 'Tum Hi Ho' for the film," says Bhushan, "We were hunting for a song which had a quintessential Indian feel to it and Mithoon was a name that came to our mind. I have worked with him in the past and when he played 'Tum Hi Ho' for me, I knew that this was it. It was an instinctive call to pick this one up for the album and pitch it as a hallmark of Aashiqui 2. We knew that we were sitting on a superhit here."

Cheery on the cake was newcomer Ankit Tiwari coming and playing 'Sunn Raha Hai' for the team. This was the game-set-match moment for Bhushan, Bhatts & Mohit Suri and there was no looking back from this point on. "It was Papa who has sent these songs from heaven. He knew we were looking for something special. Perhaps only he understood what would ultimately work for the film and the soundtrack; those who created the songs were his medium," Bhushan gets emotional here.

What further makes him emotional is the fact that the film arrives in the wake of Aashiqui (1990) which was Gulshan Kumar's first feature film and that too in an association with the Bhatts. "Yes, it is a special film for me for these reasons. Before Aashiqui, we made tele-films like Laal Dupatta Malmal Ka. My father was the one who went to Bhatt saab with ample passion and spirit to make Aashiqui. Now 20 years down the line, I suggested before Bhatt saab that we should make Aashiqui 2. It is good that he said yes," he adds.

What makes him further excited is the fact that this is one of those rare films coming out of the Bhatt camp that bears a U certificate. Smiles Bhushan, "We wanted to make a clean family entertainer with some great love songs. That was the USP of Aashiqui and we wanted to carry it on. Bhatt saab was with me on this decision and here we are today with Aashiqui 2."