Earlier last year, it was reported that after the period drama Kalank, Sonakshi Sinha has signed an interesting project which will be slice of life drama. Varun Sharma, Annu Kapoor, Kulbhushan Kharbanda and Nadira Babbar will come together with Sonakshi for this untitled project. 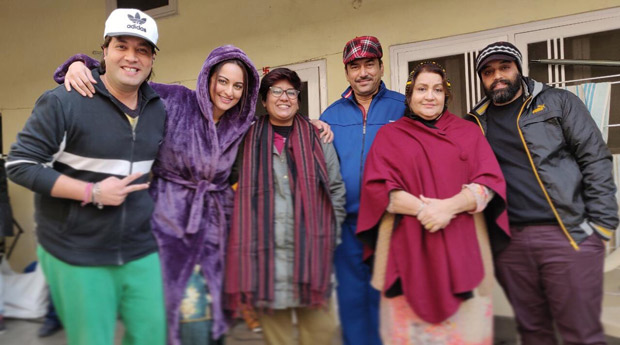 This morning, the film went on floors in Punjab. Both Sonakshi Sinha and Varun Sharma shared the same picture with their cast mates and director Shilpi Dasgupta as the filming began. Sonakshi wrote, "Naya din, nayi film... naya kaam... but no naam! First day of shoot today, will tell you the name as soon as we know! Wish us luck ❤️ directed by @shilpidasgupta, produced by @tseries.official, @mriglamba and #MahaveerJain! #23."

Directed by debutant Shilpi Dasgupta, the film is written by Gautam Mehra. Based in Hoshiyarpur (Punjab), Sonkashi Sinha plays the happy-go-lucky Punjabi girl who adores her family and will go to any lengths to see them happy even if it means not living her dreams. The yet untitled project is being produced by Fukrey director Mrighdeep Singh Lamba along with Bhushan Kumar and Mahaveer Jain. The film is slated to release later this year.