Well, we have often seen actors bump into each other whilst shooting for films. And this time around, the team of Simmba came across one of the most unexpected guests. We are talking about South celebrity Kichcha Sudeep, more prominently known for his role in Bollywood for his role in Makkhi. Although we don’t know what the Kannada superstar was doing as he bumped into the team of the Rohit Shetty directorial, we hear that he was around for some work commitments. And not surprisingly, Sudeep was more than happy to spend time with Rohit and his Simmba hero Ranveer Singh. 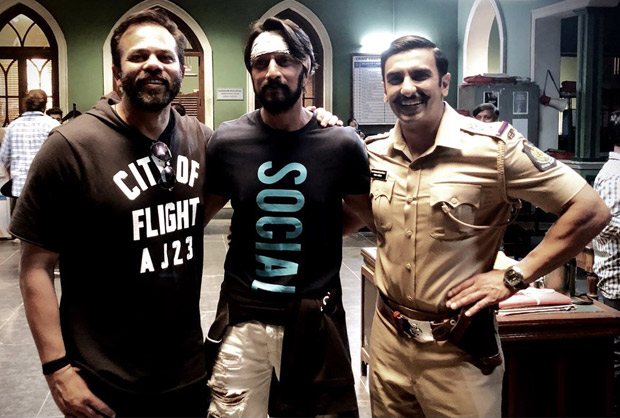 Kichcha Sudeep, who is quite active on social media, made his recent meeting with the Simmba team memorable by sharing details on the platform. The actor took to Twitter to share pictures of him interacting and posing with Rohit Shetty and Ranveer Singh. He also captioned the picture along with extending his best wishes for the film, saying, “Bumped into these amazing down to earth @RanveerOfficial an amazing human n Rohitshetty,,an energy pack. My best wshs to the team of #Simba n many thanks for the warm welcome.”

For the uninitiated, Simmba also features newbie Sara Ali Khan as Ranveer’s leading lady. Also starring Sonu Sood in a prominent role, the Bollywood film, slated to release this year, is said to be a remake of the Telugu blockbuster Temper starring Junior NTR. However, we hear that the Hindi version is much more of an adaptation with only few scenes being retained from the original. Simmba is slated to release on December 28.

On the other hand, Kichcha Sudeep is expected to be a part of one of the most expensive South films. He will be seen in a prominent role in the Chiranjeevi drama Sye Raa Narasimha Reddy that also features Nayanthara, Amitabh Bachchan amongst others.